The first coins issued for Fiji were in 1934 when Fiji was under British administration, and naturally used the old British pre-decimal system. A new decimal currency was introduced starting in 1969, two years before Britain converted to decimal. Since 1995, a small number of commemorative gold coins have been issued. Fiji is first believed to have been settled by Melanesian people as long ago as 3,500 BC. The Dutch Explorer Abel Tasman was the first European to set foot in the islands, but the natives where known to be ferocious warriors with a habit of feasting on the flesh of their fallen enemies in an attempt to gain their strength and wisdom. This evil reputation led to them being known as 'the Cannibal Islands' for a long time after their discovery.

The first European settlement was established in 1820, when the town of Levuka was established. Fiji was not united as a single political entity until 1871, when Ratu Seru Epenisa Cakobau, a local chief, managed to unite the islands and establish himself as King of Fiji. Shortly after proclaiming himself as King of Fiji, Cakobau faced internal threats from those who disputed his right to rule as King of Fiji, as well as external threats from the US, who held him personally responsible for the destruction of the private property of US Citizens. In response, Cakabau decided to cede the islands to Britain in 1874. As a former cannibal who had become a fervent convert to Christianity in 1854, Cakabau also hoped that British influence would help spread his faith to his fellow Fijians.

British Rule in Fiji did not get off to a great start, as a measles epidemic in 1875 wiped out as much of a third of the native population. The demographics of the islands were further changed by the importation of thousands of Indian labourers to the islands to work on the plantations. Although this policy was implemented ostensibly out of respect for the natives, who were not to be used as a source of labour, this policy did change the demographics of the islands which would lead to significant tensions between the two communities later on.

During World War One, the British Colonial authorities refused to allow the Fijians to enlist in the British Army, citing that this would constitute 'exploitation' of the native population, however, Ratu Lala Sukuna, a native chief, joined the French Foreign Legion instead, winning the Croix de Guerre. Following this, he went on to study at Oxford, becoming the first Fijian to obtain a university degree. He returned to Fiji in triumph, earning the respect of both his native Fijians and the British.
By the time of the outbreak of World War II, the British had reversed their policy of refusing the recruit Fijians, and the Fiji Infantry Regiment, commanded by Edward Cakobau, the descendent of the former King of Fiji, served with distinction as part of the New Zealand Army.

Today, Fiji is the birthplace of the disproportionately largest number of overseas recruits to the British Army.

In 1970, Fiji became an independent Commonwealth Realm. By this point, Indian-Fijians outnumbered the native population, and many Fijians perceived that the democratically elected government of Fiji favoured the Indian community over the native one. In 1987, a Fijian Army officer, Colonel Sitiveni Rabuka, led a coup against the government. Rabuka declared Fiji to be a republic, but retained its former governor-general Penaia Kanatabatu Ganilau as acting head of state, by appointing him as president. Ratu Sir Kamisese Mara also remained as Prime Minister. Neither the coup leader nor the government felt strong enough to fully overcome the other.

Fiji has issued its own coins since 1934 in sterling denominations, and decimalised in 1969 converting to dollar and cent denominations.
We usually have in stock at least a few Fiji coins. The mintage figures tend to be quite low, although perhaps this is to expected with a population of under 1 million. In spite of the fact that Fiji has been a republic since a coup in 1987 which ousted Elizabeth II as Queen of Fiji, monarchist sentiment remains strong, and she remains the 'Paramount Chief of Fiji'. Consequently, the Queen's image still adorns the obverse of Fijian coins.

In 1980, gold $200 coins were issued to commemorate the tenth anniversary of independence in 1970. These featured a portrait of Prince Charles who we believe attended celebrations. Both proof and uncirculated versions were issued.

A one ounce gold bullion coin was launched on March 1st 2009.

Some Examples of Fijian Coins 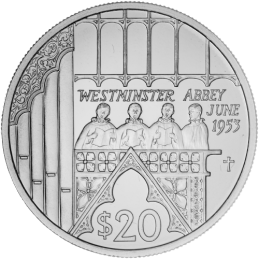 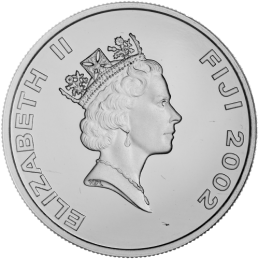 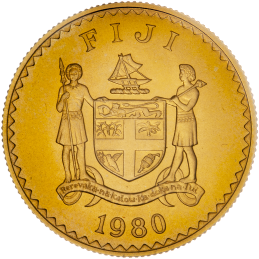 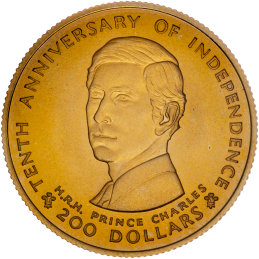