This is the second in the series of The Coins of Queen Victoria - The Portraits.

The Gothic Revival in the Victorian Era

During the mid 19th century there was a revival of the Gothic style; a style which the Victorians revered. The Gothic style was reminiscent of chivalry and romance of the medieval age. It influenced every aspect of Victorian life; from architecture, literature, furniture, clothing and coinage. From the change in their pockets to the buildings in the towns and cities, the Gothic design surrounded the Victorians. 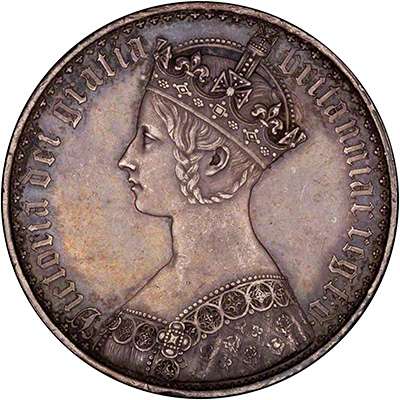 Queen Victoria Portrait - The Gothic Portrait on the 1847 Crown

The magnificent Gothic portrait was created by Royal Mint chief engraver, William Wyon. Introduced in 1847 on the silver crown, this magnificent medieval style portrait of Queen Victoria epitomises the whimsical grandeur of the by-gone medieval era. The Gothic Crown was born.

Facing left, the young Queen Victoria is shown wearing an ornate crown, her hair is loosely braided with a long plait exposing the ear and tucked into the back of her crown. The crown's tip cuts through border of small trefoil and arcs. This was the first time since the coinage of Charles II that a monarch had been featured wearing a crown on British coinage.

The inscription around the coin is in a medieval gothic style font in upper and lower case which was most unusual for the time.

The 1847 proof issues can achieve prices in excess of £20,000. The silver proof with the SEPTIMO inscribed edge and the gold proof with a plain edge are considered to be the highest rarity. The circulated crown varies in price according to the amount of wear, this coin has UNDECIMO inscribed on the edge. This coin could achieve between £400 to £6,250 depending on the condition.

Two variations of the 1853 proof crowns exist, one with a SEPTIMO inscribed edge and one with a plain edge, in FDC grades these coins could fetch £30,000 and £40,000 respectively.

In 1848, a furore erupted when the silver florin was introduced as a pattern coin and in 1849 as a circulation coin.

The florin first appeared in British coinage in 1344 by Edward III who had hoped that this medieval gold coin with a value of six shillings would be used in Europe as well as England.

Using the same Gothic portrait by William Wyon, the bust is proportionally larger, covering more of the coin's surface. The engraver's initials W.W. are in relief to the right of the effigy. The tip of the crown cuts into the beaded edge and the inscription is is bold capital letters.

However, the British public were outraged. Not only was the portrait different from anything they had seen before, but DEI GRATIA ("by the grace of God") had been dropped from the coin's inscription VICTORIA REGINA 1849.

The Victorian siver florin was the British government's first experimental step towards decimalisation. The florin was introduced with a value of one tenth of a pound.

The reverse of the coin, also designed by William Wyon, displays crowned cruciform shields bearing the three lions passant for England, the lion rampant within a double truessure flory for Scotland, and the Gaelic harp for Ireland. In the angles are the national floral emblems; roses, a shamrock and a thistle. In the centre there is a flower motif. All contained within a tressured circular panel with crowns.

After the excesses of George IV, Victoria's subjects had taken the young queen's morals and values to heart. The majority of the British population were God-fearing staunch Christians who saw the omission as blasphemous and disrespectful. The florin was renamed the Godless Florin and to say it was not well received would be a huge understatement.

Changes were made and the florin was altered in 1851 and became known as the Gothic Florin. The diameter of the florin was increased from 28mm to 30mm and the inscription now included "d. g." (shortened from Dei Gratia). In keeping with the Gothic style the lettering was in upper and lower case and the date was shown in Roman numerals "Victoria d g brit reg f d mdcccli". The beaded edge was replaced a border of arcs. 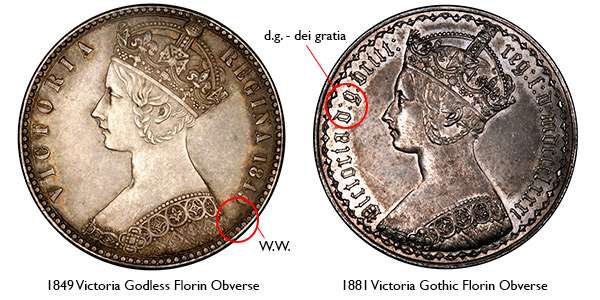 In 1868, an extra 't' was applied to 'brit' in the inscription. Further minor alterations continued until the final striking of the Gothic florin in 1887. Variations included changes to the border with the number of arcs, die numbers added under the bust from 1864 and a more youthful portrait in 1880. As the Queen approached her 61st birthday the appearance of a younger bust is rather odd. The portrait shows a more aquiline nose, a roundness to the forehead, the eye is slightly more protuberant and the hair is fractionally lower across the ear.

The Gothic Florin was issued until 1887. In 1887 a new portrait was introduced; the Jubilee Head.

We have sold Godless florins for as little as £30 for a coin in aFine grade. An aFDC 1848 pattern florin with a milled edge can achieve over £4,500.

The Gothic florin to look out for is the 1851 proof coin. In FDC grade, this coin can achieve in excess of £29,500. However, depending on the grade and mintage of the Gothic florin, you can pick one up for under £10.

As with all coins, the higher the grade of the coin, the higher the price that may be achieved. We are particularly interested in buying high grade coins. Contact us for details on 01253 343081 or by email at [email protected]

If you have enjoyed this blog, you may be interested to read The Coins of Queen Victoria - Young Head Portrait. We will be adding more blogs to this series.