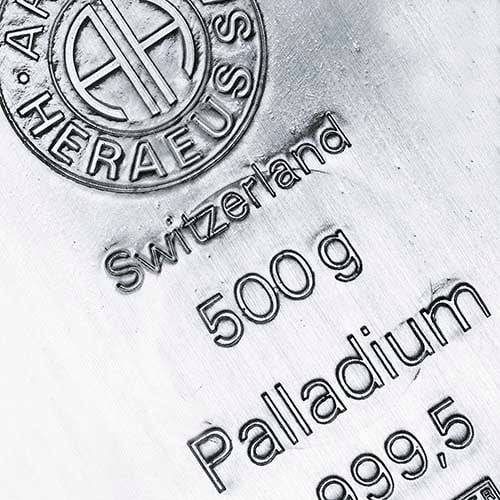 Palladium was discovered in 1803 by William H Woollaston after noticing that when ordinary platinum was dissolved in aqua regia (a combination of nitric and hydrochloric acids), not all of it turned into a solution. Palladium was eventually extracted from this remaining residue. Instead of announcing his new discovery, Woollaston anonymously placed the new metal on the market as a new form of silver.

Shortly after purchasing some of this new silver, Irish chemist and mineralogist, Richard Chenevix published a paper stating that this metal was actually an alloy of mercury and platinum. Chenevix was awarded the Copley Medal for his discovery, and attempted to prove this through the publication of a second paper after an anonymous reward was offered for confirmation of Chenevix’s experiments. Woolaston would later admit authorship and offering the reward and proved his discovery and isolation of the palladium element.

Platinum and Palladium share many features and easily comparable. They look almost identical. Both are silvery-white and are non-corrosive. Palladium has a moderately lower melting point at 1555°C compared to platinum’s melting point of 1768°C. While both metals are highly durable, palladium is only slightly harder. This means that palladium will be slightly more resistant to scratches than platinum. This will obviously be more beneficial in jewellery.

Palladium has almost half the density of platinum and so will be lighter. Palladium is also hypoallergenic, meaning it would be more suited to someone with sensitive skin and would suffer from the additional metals found in gold or silver.

The most common use of palladium is in catalytic converters, which turn pollutants into carbon dioxide and water vapour.  Although platinum could be considered an alternative, palladium has been proven to be the most effective. Leading tech firm, Johnson Mathey Plc, have said there will need to be more technological advances before platinum becomes an effective replacement.

Aside from converters, palladium is used as a catalyst for hydrogenation and dehydrogenation reactions.  It also regularly used in ceramic capacitors found in electronics such as laptops, and mobile phones.

Palladium is hypoallergenic, so it would be more suited to someone with sensitive skin and would suffer from the additional metals found in gold or silver jewellery.

The lack of supply and subsequent high price limits the use of palladium as there is little room to experiment with new uses for the metal.

What Makes Palladium so Expensive?

Like in all markets, when supply cannot meet demand, then price rises occur. As governments clampdown on vehicle emissions, car makers are forced to increase the amount of palladium for their products. With palladium being primarily a by-product of platinum and nickel mining, there is a significant lag in supply. In fact, production fell short of the demand for eight straight years up to 2019.

The Future of Palladium

Prices for palladium have increased over 637% in less than 5 years. Despite this, the COVID-19 pandemic and the economic restrictions placed on industries has led to declines in supply and demand. However, some mining regions, such as in Canada have seen positive performances through the lockdown. Some have forecasted a long-term drop in palladium as producers move toward electrical vehicles meaning the decline of conventional car sales decline.

We are currently working to get our palladium products live on our website. If you are interested in buying platinum bullion, please contact us on 01253 343081 or leave a message.

You may be interested in reading our Industry for... Gold, Silver & Platinum articles.

Click the links to see our gold and silver guides.

For centuries, gold has been considered "money", nowadays it is considered more of an investment. There are a number of avenues you can use in order to buy gold.

Selling Silver Lunar Coins To Us

We buy all types of silver coin, including the famous silver Lunar coins.

Selling Silver Maple Coins To Us

We buy all types of silver coin, including the famous Silver Maple.

Sell Scrap Silver Continental .800 To Us

Sell Scrap Silver Continental .900 To Us

Sell Scrap Silver Sterling .925 To Us

Sell Scrap Silver Britannia .958 To Us

When Do I Pay and Reclaim VAT?

We look at the VAT implications for customers who reside outside the EU and VAT registered entities.

Chard of Blackpool want to buy medals and medallioin in silver gold or platinum, including complete sets and collections of art or themed medals...

Want to know the key points when selling your items to us? Click to read more.

Selling To Chard - Our Quality Checks for Grade C and Scrap

You can sell any quantity of gold, silver, platinum and palladium to us and we will make an offer. Our offer will fluctuate based on the condition of the items.

Selling Scrap Silver To Us

We don't just sell silver coins and bars, we buy them too. Call us on 01253 343081 for our highly competitive market prices. We will always make an offer on scrap silver.