Platinum is believed to have been around since the times of the ancient Egyptians; however, it wasn't fully understood until centuries later. 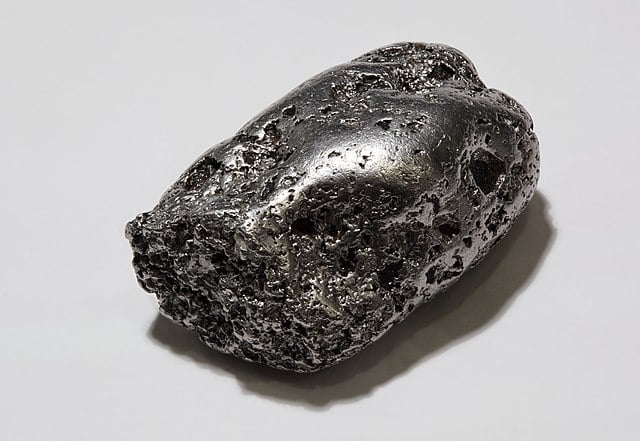 Some of the earliest traces of platinum have been found in gold used in Egyptian burials. A small casket from the burial of Shepenupet II (around 700-650 BC) was decorated with gold-platinum hieroglyphics. In the 16th century, Julius Scaliger wrote of a metal found in the mines between Mexico and Panama that fire could not melt. Towards the end of the 18th century, methods of producing platinum had been developed but the qualities were often inconsistent due to the presence of other undiscovered metals. These other metals (osmium, iridium, rhodium, palladium) were later discovered by William H Wollaston a few decades later. It's name derives from the the Spanish word "platina" which means "little silver".

Platinum (chemical symbol: Pa) is one of the Platinum Group Metals (PGM), which is a collection of silver(y) coloured metals that have similar properties and are often found in the same ore (although ALL metals are silvery grey with the exceptions of gold and copper). The others include the 4 discovered by Wollaston with the addition of ruthenium.

Platinum, like silver, is malleable and ductile, but with a much higher melting point of 1768°C. It doesn’t oxidise, nor is it affected by acid. It does however dissolve in aqua regia, which is a combination of nitric and hydrochloric acids. The subsequent reaction forms chloroplatinic acid.

In comparison, platinum is approximately 11% denser than gold and roughly twice the weight of silver.

Platinum, palladium (Pd), rhodium (Rh), osmium (Os), iridium (Ir) and ruthenium (Ru) are the six PGMs, that have similar chemical and physical properties that are often found in the same mineral deposits. 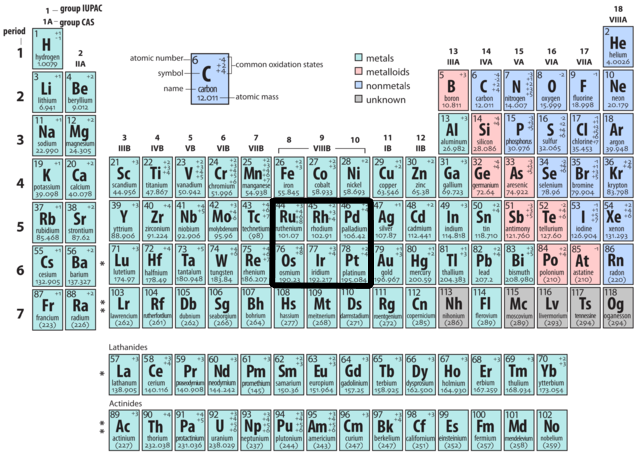 While platinum and palladium are both soft, ductile and relatively easy to use; rhodium and iridium are much harder to work with although rhodium has good catalytic uses. Ruthenium and osmium on the other hand are hard and brittle and are almost unworkable in their solid state.but can be alloyed to other PGMs for catalytic properties.

The most common application for platinum is as catalyst for chemical reactions. It has been used for catalytic purposes since the early 19th century, but nowadays is used in automobiles converting unburned hydrocarbons into carbon dioxide and water vapour. Its use in catalytic converters makes up around 40% of total use making the automotive industry a key player in driving platinum's demand.

The chemical industry often uses platinum as a catalyst to make many household chemicals such as nitric acid, which is used in fertilisers but also several everyday materials such as nylon and polyurethane. Platinum is also used in other household areas such as in electrical wire insulation, kitchen utensils and sealants.

Glass production uses extremely high temperatures. It is completely liquid at around 1400°C or 1600°C. This means the tools required in manufacturing require an even higher melting point. Platinum bushings, for example are used to sieve fiberglass.

Like gold, platinum does not react with other chemicals, which makes it perfect for use in medical and biomedical equipment. Platinum does have one advantage of gold in one respect in that it is much harder than gold and will therefore last longer. Catheters, pacemakers and stents all have components made of platinum. Cancer drugs such as cisplatin also contain platinum.

Both gold and platinum are used in jewellery, but have slightly different physical properties. Gold is sometimes (but not always) more expensive than platinum, so platinum can be more cost effective. However, due to its density, more platinum is needed to produce a platinum ring than gold is needed to make a gold ring. This is due to the fact that gold is often alloyed with other metals like copper, which will reduce the actual amount of gold in the ring itself. This could mean that your platinum ring is not as economical as first hoped. Platinum is stronger and more durable than gold but it will scratch more easily than 9 or 14k gold, due to the strengthening of the metal alloys. Gold in itself is softer than other metals, therefore for day-to-today usage, it needs strengthening with stonger metals such as copper, silver and even platinum. While some people prefer white gold jewellery rather than yellow gold, over time, white gold will need need replating (usually with rhodium) or polishing (which will actually make it worse), whereas platinum will stay white.

As platinum is not often found in isolation, it involves further refining processes which increase production costs. For instance, refining a batch of platinum ore can take anywhere between 8 weeks to 6 months, while a single troy ounce of platinum can involve working through up to 11 tonnes of ore.

South Africa produces the majority of the world’s platinum, processing around 110 tonnes in 2018. This is on top of its national reserve of PGMs of 63,000 tonnes. It’s closest competitor, Russia produces only a fraction of this amount with a production of only 21 tonnes in the same period and a PGM reserve of 3,900 tonnes.

Until recently, we have tended to avoid marketing new platinum coins, mainly because of VAT and platinum being higher priced than gold. With the significant drop in platinum bullion prices, which we do not fully understand, we now think that platinum is a bargain and a good potential investment, especially as we can now offer platinum coins and bars VAT free (for delivery or storage outside the UK / EU).

We are currently in the process of adding some new platinum coins and platinum bullion bars to our website.