The History of the Krugerrand

Everything You Need To Know About Krugerrands!

South African Krugerrands were first minted and issued in 1967. This is our comprehensive information page - if you are looking to purchase gold Krugerrands, click here. 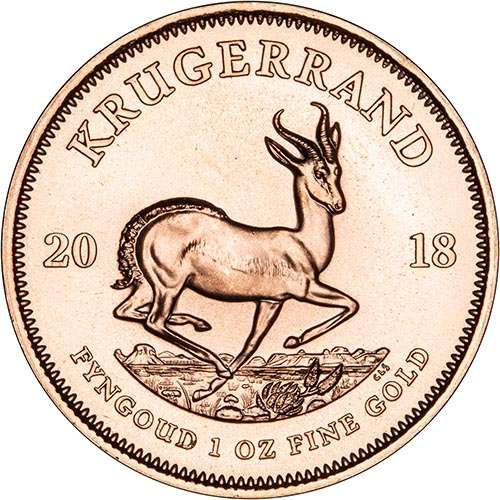 The South African Chamber of Mines had an inspired idea to help market South African gold. It was to issue a one ounce bullion coin, to be sold at a very low premium over the intrinsic gold value. They are still considered to be a good investment and continue to carry low premiums over gold. Originally only one size was issued, which contained one full troy ounce (31.1035 grams) of fine gold. This was originally known as a Krugerrand, or Kruger, for short. You can see common misspellings of the Krugerrand here.

Krugerrands were first minted and issued in 1967, and have been produced every year since. They have legal tender status in South Africa, which allowed them to be imported into many, but not all, countries without import taxes, duty or VAT. You can see the mintage figures of Krugerrands here.

At the time of the Kruger's introduction, it was not legally possible for British residents to acquire bullion gold coins, so that the Krugerrand was almost unknown in Britain until 1971.

The South African Mint however are solely responsible for the commemorative and proof versions of the Krugerrand.

The bullion Krugerrand, both silver and gold, are now produced underneath the company name "Prestige Bullion", which was formed in 2013 by Rand Refinery and South African Mint. Prestige Bullion is responsible for all South African bullion coins which have a local legal tender status.

Face Value of the Gold Krugerrand

According to the publicity at the time, the Kruger was to be made available to world bullion dealers at a 3% premium over the current gold fix, so that after distribution costs, the coins would be available to investors in quantity at about 4% to 5% over intrinsic gold values, and possibly 10% premium for single pieces.

As an example of this, in the 1970's we, as a small provincial dealer, would frequently handle 500 Krugerrands in a single day, but a purchase of 100 tenth Krugerrands was a major event, yet it was only 1/50th the size of deal!

Not a Pretty Sight

Krugers were never intended to be an aesthetically pleasing coin, just a lump of gold with a known weight and value. They certainly cannot be called pretty.

Collectors seeking aesthetically attractive coins would be better looking at British gold sovereigns, or some of the newer bullion coins.

In Britain VAT was imposed on all coins, except antiques.

In January 1995, this was relaxed on almost all second-hand goods, including gold coins. This means that existing privately owned coins can be traded by dealers under a "special scheme" whereby the only VAT chargeable is on the dealer's margin, which is negligible. Because VAT was still payable on any "new" coins, it remained more difficult and expensive to buy and sell large quantities of bullion coins.

Throughout the whole of this time, Chard have maintained a dealing service for both collectors and investors in bullion and numismatic coins. During the period from 1965 to 1971, we were one of only a small number of dealers who were granted a dealers licence. You can view why Krugers are a good buy here.

The following tables summarise the specifications of all the sizes.

For over 10 years we had an error on our pages regarding the number of serrations on the edge of the coin. We are happy to accept our mistake and have gone into detail on our Krugerrand Misinformation page.

In 2017, the South African mint issued a silver 1oz Krugerrand in a premium uncirculated (PU) condition. In 2018, under Prestige Bullion, a joint venture with the Rand Refinery, they produced the first silver 1oz bullion Krugerrand.

When this page was originally created, we could offer Krugerrands at 7% premium for singles, and 5% or £10 premium for quantity of ten or more, over the intrinsic bullion price.