Prince George Frederick Ernest Albert was born on the 3rd of June 1865, the second Son of Albert Edward Prince of Wales (later Edward VII) and Alexandra of Denmark. George V's reign was one of great social and political change, in Britain, but especially in Europe, where most other monarchies collapsed in the wake of the First World War.

As the second son of the Prince of Wales, Prince George was not in the direct line of succession, and hence was not expected to succeed to the throne. Consequently, he embarked on an active career in the Royal Navy, as had his great-great Uncle, William IV in similar circumstances. This new 'Sailor King' travelled the world while on active service, seeing much of the Empire and the rest of the world as a young man. However, his naval career came to an end in 1892, when his elder brother Albert Victor, second in line to the throne, died of pneumonia. 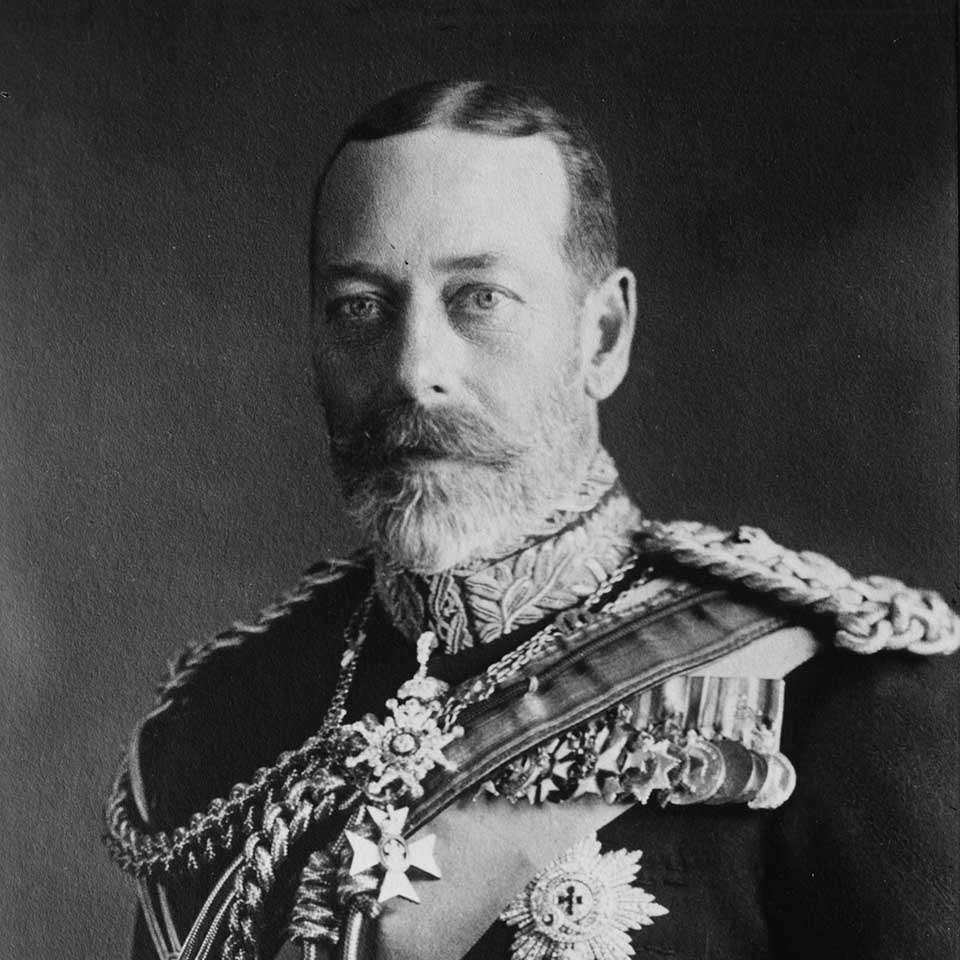 Having been compelled to retire from active service with the navy, George spent much of the rest of his Grandmother's reign at York Cottage in Sandringham House, spending his time hunting and collecting stamps (the Future King was perhaps the world's most famous philatelist). In 1893, George married Mary of Teck, who had been the intended bride for his elder brother. During the course of this marriage, the couple went on to have six children, including two future Kings (Edward VIII and George VI) as well as the tragically fated Prince John. Upon the death of his grandmother and the accession of his father as Edward VII, George V became the new Prince of Wales, and found a new role in public life as heir apparent to the throne, he toured the Empire to boost the standing of Britain and the Royal Family in the far flung colonies, and personally opened the first session of the new Australian Parliament in Melbourne (then the temporary capital of the new Australian Commonwealth) on the 9th of May 1901. George later toured India in 1906, where like his father before him, he was appalled by the racist attitudes of the British authorities there and campaigned to increase the involvement of native Indians in Indian affairs. George frequently represented the British Royal Family at Royal Weddings in other European nations.

George's father died in 1910, and Prince George became George V. He was crowned as King the following year in June 1911, and sixth months later, was the first and only British Emperor of India to be present at the Delhi Durbar where he was officially crowned as Emperor. At the time of George's accession, Britain was in the middle of a political and constitutional crisis. The House of Lords had, contrary to established precedent, rejected a Commons-approved budget, and the Parliament Act of 1911 was passed to officially remove the power of the Lords to vote on a budgetary bill in the future, as well as confining the power of the Lords to vote to delay, rather than veto Commons legislation in the future. It was under the auspices of this act that the Home Rule act of 1914 was finally passed, after decades of on an off attempts to grant Home Rule to Ireland. Ireland threatened to plunge itself into Civil War over the issue, until the outbreak of the First World War in 1914 caused the issue to be shelved until after the conclusion of foreign hostilities.

The First World War proved to be a turning point in the history of the Monarchy in Britain and in Europe. Anti-German feelings during the course of the war led to much criticism of the Royal Family for being too German. H.G. Wells' was drawn to criticise Britain's 'alien and uninspiring court', to which George V is said to have replied 'I may be uninspiring, but I will be damned if I'm an alien!' The King nevertheless came to the conclusion that his dynasty's German origins and familial connections with German Royalty were liabilities that needed to be addressed. In 1917 therefore, he changed his family's surname of Saxe-Coberg Gotha to the much more English name of Windsor, by which name the Royal dynasty continues to this day.

For other Royal Houses in Europe however, it would have taken more than a change of name to preserve them from the revolutionary forces which swept through the old Empire's of Europe. In 1917, the Tsar of Russia, Nicholas II was forced to abdicate as the pressures of war threatened Russia with collapse. Fear of a similar outbreak of violent republican uprisings persuaded George against rescuing his cousin from Russian Revolutionaries, and he was murdered along with his wife and children the following year. His other cousin, Kaiser Wilhelm was also compelled to abdicate the following year as his country's defeat loomed. The defeat of Austria-Hungary also saw the break-up of that empire and the end of its monarchy. In the aftermath of the First World War, people in those countries that had suffered most from the war lost faith in the old orders, and a wave of violent revolutionary republicanism was sweeping the European continent in a manner not seen since the French Revolution.

The harsh economic circumstances in Britain following the First World War, combined with the rise of communism in the wake of the Russian Revolution, led to a resurgence in socialism and socialist ideals in Britain, giving rise to the fears that what had happened in Russia, Germany and elsewhere could be repeated in Britain. An armed rebellion in Ireland had led to the establishment of the Irish Free State, independent of the UK by 1922. Two years later, the socialist Labour Party came to power for the first time in coalition with the Liberals. Two years after that, in 1926, the General Strike occurred, and he apparently sympathised with the strikers, and responded to the accusation that they were revolutionaries with the comment 'Try living on their wages before you judge them'. In 1931, the crisis afflicting Britain led to the King to encourage the formation of National Government. In an attempt to bring himself closer to his subjects, he began a radio broadcast in Christmas 1932 so that he could speak directly to them all, which was the pre-cursor to the Christmas Speech given every Christmas since that time.

The King's relationship with his son the, Prince of Wales was, not for the first time in Royal history, severely strained. George despaired at his son's irresponsible conduct with married women, and predicted that he would lose his crown within 12 months of succeeding him as King. This proved to be a prescient observation, as within 11 months of his death in January 1936, his eldest son abdicated the throne. 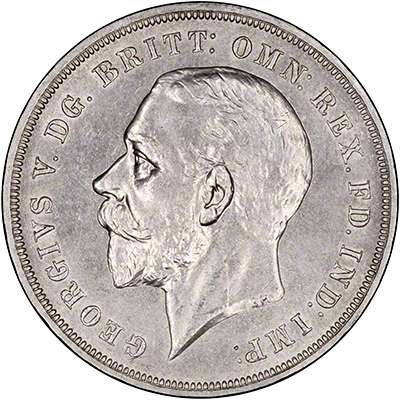 that it is today. Although it's position seemed precarious in the early years following the war, by the time of his death in 1936, the danger to the throne had largely passed, and the monarchy was enjoying a renewed popularity.

Numismatically, the reign of George V is notable for the notorious debasement of 1920, when rising prices of silver and the need to repay American loans led to the fineness of silver coins being reduced from the historic 0.925 sterling standard to the 0.5 standard in 1920. The strain of the war and the economic circumstances following it meant that the gold coinage was effectively discontinued during the First World War. Although the pound officially remained tariffed at 0.2354 of a troy ounce of gold, the inflationary effects of the war had effectively eroded the pound's value. This kind of situation was not new, as the pressures of fighting the Napoleonic Wars more than a century before had resulted in a similar difference between the pound's official value and its market value. However, Britain's decline in economic power and share in international trade relative to the rest of the world, as well as the democratic power of enfranchised but impoverished working class voters ensured that any attempts to restrict the money supply and deflate the pound back to its official value were no longer feasible. Sovereigns continued to be minted in the years following the First World War, but traded at a premium over their face value. In 1932, Britain was officially taken off the 300 year old gold standard, and the production of sovereigns ceased, not to be resumed for several years. Britain's long-established tradition of setting the world standard for a high-intrinsic value currency was at an end. The slide towards a purely fiat currency was now well under way.