Of the many cancellations and delays caused by Coronavirus, the Tokyo 2020 Olympic and Paralympic Games is one of the biggest. With 11,091 athletes set to compete at the Olympic Games and a record 4,400 at the Paralympic Games (not to mention the crowds of spectators) organisers had no choice but to delay the games until summer 2021. This makes the Royal Mint’s new Team GB 2020 celebration 50p piece an error coin. What will that mean for its value? 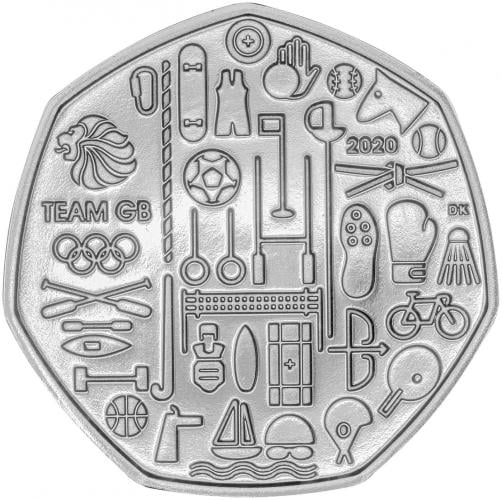 The Team GB 2020 50p coin, which has already been produced, is now also an error coin as Team GB will be competing in 2021. There is no doubt that this new 50p piece will be a popular one. Its designer, David Knapton, has created not just a coin but also a game. With an icon to represent each of the sports to be competed in, the challenge is to see if you can identify all of the 33 sports. An extra test, for the experts among you, could be to identify the 5 new sports to join the Olympic Programme in Tokyo.

Error coins typically cost a collector more as their errors make them more interesting and so more sought after. It is also unknown how many of these coins have or will be minted. So, this already interesting coin becomes even more popular! With prices for this coin already up to £50 on some online auction sites and the 2020 Annual Coin Set prices rising with it, this coin is set to become one of the most in demand coins of this year.

However, the unprecedented decision has been made to reschedule the event. The Olympic Games will now start on 23rd July 2021 and run to the 8th August 2021. The hope is that this will give time for the Coronavirus epidemic to abate. In the same vein, the Paralympic Games will begin on 24th August 2021 and end on 5th September 2021.

The 2020 Team GB 50p is not the first Olympic themed coin to cause a stir. The most famous of these was the London 2012 Aquatic 50p. A rare version of this coin surfaced with water lines obscuring the swimmer’s face. It turns out that this was the original design for the coin but that it was changed before its release to make the swimmer’s face more visible. This coin and very few others like it were accidentally struck and entered into circulation. What makes them even more collectable is that no-one knows exactly how many of these coins were struck. This example of the coin sold for £590, more than 1,180 times its face value.

A Glimmer of Hope

Although tough, this unavoidable decision was almost made for the committee. In order to protect the health of the athletes and everyone involved, and to support the containment of the Covid-19 virus the Tokyo Games had to be delayed.

However, there is a positive side to the move. IOC president Thomas Bach said: "Humankind currently finds itself in a dark tunnel. These Olympic Games Tokyo 2020 can be a light at the end of this tunnel." Like the Olympic Torch, which itself is a symbol of hope and peace, the Tokyo Games now represent the hope that happier times are on the horizon.