The wrestling 50p from the London 2012 Sports Collection is the third rarest 50p currently in circulation and is extremely sought after by collectors. Examples of the circulated coin regularly sell for £8-£10 online and BU coins are also highly regarded fetching upwards of £12 in their original packaging. Designed by Roderick Enriquez the reverse of the coin portrays a wrestling match in a huge stadium. The London 2012 logo sits in the topmost corner of the coin and is surrounded by rows of dots stretching off into the background. These represent that spotlights beating down on the competitors. Also in the background, just below these spotlights we see row upon row of miniscule spectators. Again, these are represented by dots as small as pin pricks disappearing into the distance, showing the vast size of the stadium setting. This shows the popularity and prominence of Olympic wrestling. This is reinforced by the grappling wrestlers who seem to tower imposingly in the centre of the coin. They are locked in an impressive throw of grand amplitude. The wrestler nearest the left-hand side of the coin is about to takedown his opponent in the most exciting (and rewarding) way possible, earning himself 5 points. We can see this as he has completely flipped his opponent so that his feet are above his head. Beneath the wrestlers, four concentric circles represent the wrestling mat. Finally, the denomination 50 PENCE curves around the bottom of the coin.

The obverse of the coin bears the fourth portrait of The Queen. The Queen wears the "Girls of Great Britain and Ireland" diamond tiara, a wedding gift from her grandmother Queen Mary. Below the head are the artist's initials IRB (for Ian Rank-Broadley). The inscription reads: ELIZABETH · II · D · G REG · F · D · 2011. 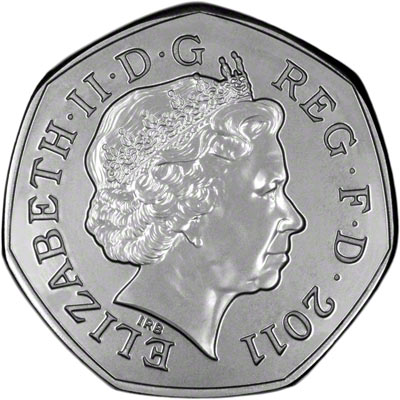 Roderick Enriquez was one of 29 people chosen to win the Royal Mint’s 2009 competition to design 50ps representing sports across the Olympic and Paralympic programme. This was an open competition giving members of the public a rare chance to design coins that would go into circulation as part of the London 2012 Sports Collection. As a graphic designer, some would say that Enriquez had something of a head start. However, it is clear from his design that he also has a passion for the sport and is a deserving winner.

Delighted to be selected, Roderick said, “I simply cannot believe it as I know there were thousands upon thousands of entries submitted to this competition! I’m so delighted to have won, especially as a Filipino-British national. As that’s what I believe London 2012 should be, hosted by people from many cultural backgrounds!”

Roderick chose to design the Wrestling coin as he felt the sport best represented The Olympic Games in both its ancient and modern iterations. This certainly makes sense as wrestling has been part of the Olympics since they first began in Greece way back in 776 BC. Originally, wrestlers would have competed in the Greco-Roman wrestling style. However, freestyle wrestling has become so popular in modern times that it has joined the original style on the Olympic programme. So, there are now two types of Olympic wrestling for competitors and spectators to enjoy.

This coin was minted in three varieties. The circulated coins are the third rarest 50ps in circulation. Also, as their design is popular with both sports and coin enthusiasts, they have become even rarer as many of them are held in collections rather than used to pay for goods.

There is also a highly collectable brilliant uncirculated version of the coin. It is presented in a colourful authentication card with a geometric design that complements the design of the London 2012 logo, which appears in the bottom right corner of every card. Check for this and that the card has The Royal Mint logo and the London 2012 hologram on the back of the card. They should be in the black banner at the bottom. The rest of the back of the card is bright pink with a list of the coins in The London 2012 Sports Collection in black text. The wrestling coin is number 29 in the 29-coin collection. Each of the 29 sports in the collection has its own card with a representation of the sport and its own combination of colours. The wrestling card has a stylised image of two wrestlers about to clash at the beginning of a match. The colours on the front of the wrestling card are predominantly pink and sky blue with yellow and white writing. 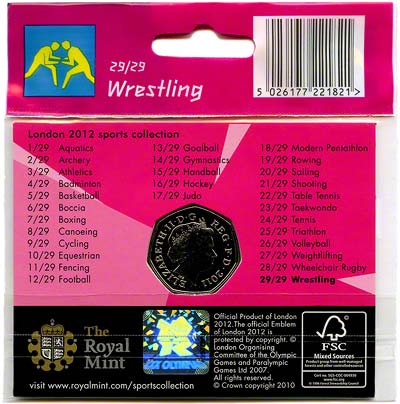 Finally, there is a silver version of the coin. It too should come with an authentication card. However, the coin itself is not set into the authentication card, as it is with the brilliant uncirculated version, but in a separate, clear, protective case which is fitted to a black card which bears the words ‘A piece of history beautifully crafted by The Royal Mint’ and a partial image of a fifty pence piece. In the image, the back of Her Majesty’s head is visible with the ELIZABETH II part of the inscription. The authentication card still bears the stylised wrestlers on the front but has a white background. It also has The Royal Mint logo as well as the London 2012 logo on the front. The 2012 hologram remains on the back of the card.

Unfortunately, there isn’t a great deal to say about Team GB’s wrestling performance at London 2012. Despite being awarded three guaranteed host nation places for the 2012 Olympics, only one British wrestler met the agreed performance targets and so Olga Butkevych became Team GB’s only wrestler at London 2012. Luckily for us, women’s wrestling was included, as it made its first appearance at the Olympics only 8 years earlier at the 2004 games in Athens.

When asked about the situation, 2012 Team GB Chef de Mission Andy Hunt said "There is a standard across Team GB that must be upheld," explaining that all sports representing Team GB must be “fully prepared to make the most of the unprecedented opportunity of competing in a Home Games and deliver a meaningful participation legacy.”

As Team GB’s sole wrestler, Butkevych competed in the women's 55 kilograms (121 lb) category. Disappointingly, she finished without a medal, losing in the first round to Lissette Antes of Ecuador. However, despite placing a disappointing 11th in the final standings at London 2012, Butkevych bounced back and went on to become the first British wrestler to medal at the World Championships. Later that same year she won bronze, in the September 2012 Championships in Edmonton, Canada.