Famous for being the King who abdicated the throne before his coronation in order to marry Wallis Simpson, the episode of King Edward VIII is one of the most controversial in the history of the British Monarchy and is one which continues to haunt it down to the present day. As a result, no gold sovereign coins were issued during the reign of Edward VIII so beware of fraudsters trying to sell you one! (An extremely small quantity of official patterns were produced but not issued to the public). 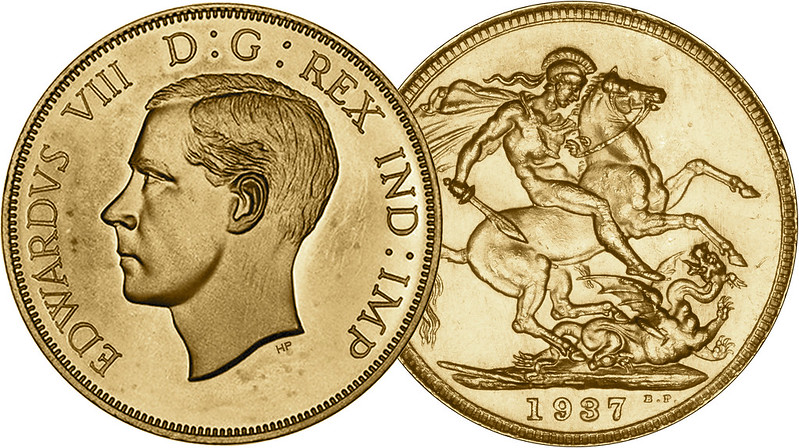 There were, of course, coins issued bearing Edward's name, but not portrait for British West Africa and East Africa, all dated 1936. These are quite common, but they are all low denomination base metal coins, so of little relevance for collectors searching for gold coins.

A number of unofficial pattern coins have been produced for Edward VIII, mainly as fantasy coins, and presumably because of the shortage of, and demand for, the real thing. Most of these would be better described as "fantasy" pieces.

Many people, often part-time or full-time dealers masquerading as collectors offer unofficial patterns similar to these for sale, particularly on eBay. In many if not most cases, they fail to state clearly that these are not officially issued patterns, and have no legal tender status. We believe this practice is fraudulent, and strongly recommend you avoid doing business with dishonest vendors. If you knowingly buy from them, you are condoning and encouraging their deceptive and dishonest practices.

A genuine authentic Edward VIII gold sovereign lists at £150,000 in Spink's 2007 Catalogue. The imitation fantasy "patterns" contain about £60 worth of gold. If you want one for your collection you should not pay much more than this. Some buyers with more money than sense have been known to pay up to £300 for one!

Such idiots should be taken out and shot for encouraging and rewarding dishonesty.

An official restrike is a genuine coin struck by the original Mint, but with a retrospective date. The word restrike is often euphemistically and dishonestly used for fakes

Please refer to our restrikes page for more detailed information.

We buy gold sovereigns and are always intersted in buying Edward VIII sovereigns should you ever stumble across one. Please get in touch on 01253 343081. We also buy bullion and you can find current prices on our sell page here

If you would like to know more about the gold sovereign coin, promintent designs or other rare and collectable coins, we recommend the following: