B.P. - Benedetto Pistrucci - We are often asked what the B.P. initials are on gold sovereigns, and other coins. They are the initials of the designer of the St. George and dragon design on the reverse of gold sovereigns. It also appears on some half sovereigns and crowns. It is a common practice for designers or engravers to place their name or initials on the side of any coin they have designed.

The most common place to find the B.P. initials are in the exergue, the part of the coin under the main design on the reverse, where you will often find the date on many modern coins. It is always in the top right hand corner of the exergue, just below the ground line. On some earlier sovereigns, it can be found hidden in the ground below the broken spear or lance, but this is very difficult to see as it has been quite well concealed. We have shown a two photographs on an 1820 sovereign of George III, on being a close-up of the area containing the initials. 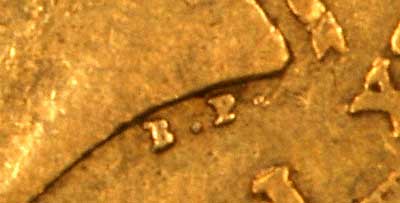 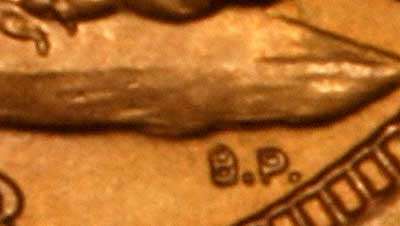 On the laureate head sovereigns of George IV, the initials B.P. can also be found, quite large, under the portrait.

Not An Advert for B.P.

Just in case anyone thinks that the initials B.P. are sponsorship or free advertising for the giant oil company B.P., previously British Petroleum, we can dispel the image.

Check out our range of articles on mints and mintmarks here

Hopefully, this page will have answered questions for many, please note that the initial are clearer and easier to see on some sovereigns, depending on many factors. We have shown a number of examples in our photographs to help you compare.

You may also be interested in finding die numbers on sovereigns. Click here to read the full article.