You have reached our blog, if you would like to buy the 2017 Isaac Newton Fifty Pence Coins click this link.

Every year The Royal Mint produce coins to commemorate historic and current events. These coins often feature in the annual coin sets and then are released individually later on in the year. Sir Isaac Newton Commemorative 50 Pence.

2017 marks the 350th anniversary of Newton's birth in 1667 and this has been commemorated with a fifty pence piece that celebrates this 'scientific genius'. 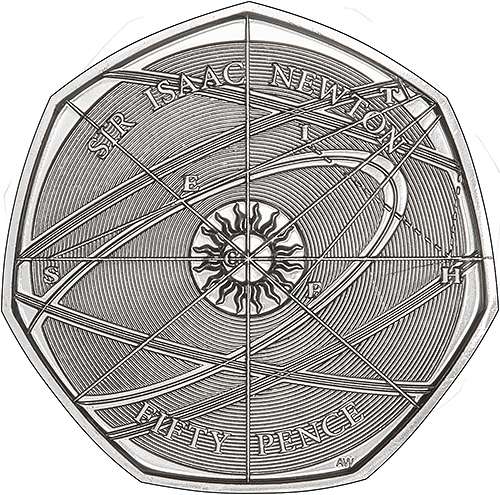 Despite being issued in the annual coin sets in January 2017 and into general circulation in June 2017, the official release date for the brilliant uncirculated, silver proof, silver proof piedfort and gold proof coins is the 4th September 2017.

Designed by Aaron West, one of The Royal Mint's graphic designers, the coin is based upon elements of Proposition 11, from Book One of Newton's Principia Mathematica, first published in Latin on 5 July 1687.

The sun is the focal point of the design with three ellipses representing the orbits of different planets around it. "SIR ISAAC NEWTON" is also written across the top of the design and the denomination is shown in words "FIFTY PENCE" underneath the design.

The obverse features the fifth portrait of Her Majesty The Queen by Jody Clark. We think it's interesting that The Royal Mint have chosen to focus on Newton's understanding of physics rather than his role at The Mint – especially as the information that accompanies the coin focuses on the contributions he made to our coinage as Master of the Mint.

Master of the Mint

Master of the Mint was the highest ranking office at The Royal Mint from 1331 – 1879, when the position was abolished and duties given to the Chancellor of the Exchequer. They were assisted by the Warden of the Mint – although on occasion both positions were held by the same person!

Newton became Warden of the Mint in 1696 and was quickly promoted to Master of the Mint in 1699 following the death of Thomas Neale. Whilst these roles were intended as sinecures - a position requiring little or no work but giving the holder status or financial benefit – Newton took his role very seriously and used his power to reform the currency and punishing counterfeiters.

In the late 17th century, King William III attempted to replace the coinage due to the amount of clipped and counterfeit coins in circulation. He enlisted the help of Newton who was Warden of the Mint at that time.

It was estimated during this great recoinage that 1 in 10 coins was counterfeit, however Newton thought this figure was closer to 20% and set about investigating and punishing counterfeiters. He gathered much of the evidence himself, disguised as a regular of bars and taverns and after having himself made Justice of the Peace in all the home counties he went on to successfully prosecute 28 coiners.

Another very important event that occurred during Newton's time at The Mint was his report into the bimetallic relationship between gold coins and silver coins. This report valued a guinea at no more than 21 silver shillings.

By introducing a new mint ratio, Newton dramatically reduced the amount of silver in circulation in the UK, as much of it was used to pay for imports. This 'one-way' movement of silver resulted in the pound sterling inadvertently moving from a bimetallic standard to a monometallic (gold) standard in 1821.

It is clear from the reports that Newton produced during his time at The Mint (1696 until his death in 1727) that he approached his work with the same vigour he had applied to his alchemic work.

Whilst he is more commonly known as a mathematician, astronomer, and physicist, we believe that Sir Isaac Newton should also be recognised for his contribution to coinage – in fact we wonder what he would make of the millions of fake coins in circulation today?