The Kew Gardens 50p is the rarest coin currently in circulation. It has been known to sell for over 200 times its face value. Here we take a look at the coin, its surprising popularity and the organisation it was minted to celebrate. 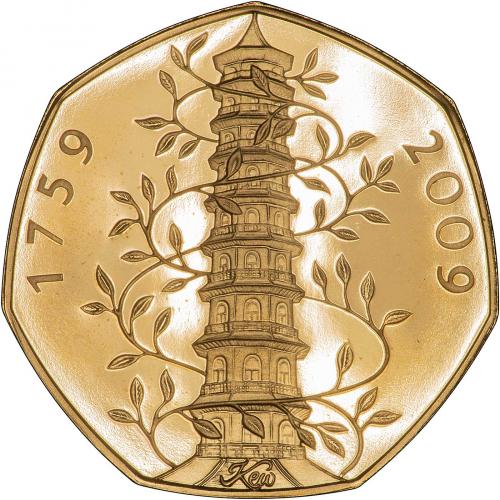 The Rarest of Them All - The Kew Gardens Circulating 50p

The commemorative Kew Gardens 50p, created to celebrate the 250th anniversary of Kew Gardens, has become something of a numismatic holy grail. However, its popularity has nothing to do with the gardens or their fame but a fluke of minting coincidence. When this coin was struck in 2009, only 210,000 were produced. This is very unusual as a new 50p design will normally have 5 million coins put into circulation. So, you can see that the Kew gardens design is much rarer than other designs but why?

Well, the number of coins struck by the Royal Mint in any one year depends upon demand. The Royal Mint provides coins to banks, Post Offices and distribution centres. There is no way to know for certain but perhaps demand that year was particularly low. Also, plans were already underway for the 2012 50ps that would celebrate the London 2012 Olympics. There were 29 designs released that year and circulation was flooded with a total of 53,261,000 new 50ps. So, it is probable that the mintage numbers of 50ps in the preceding years were kept to a minimum to prepare for this excess.

Some collectors worried when, in 2019, the Kew Gardens 50p was reissued as part of the ‘50th Anniversary of the 50p’ coin set. How many would be minted? Would this make their original less rare? However, they needn’t have troubled themselves! The reissued coins were released with a different obverse design. On the 2019 coin, we see the fifth definitive UK coin portrait of Queen Elizabeth II (easily distinguishable by the drop pearl earrings) and the inscription includes the new date (2019). So, all you have to do to make sure you have an original is check out the Queen. 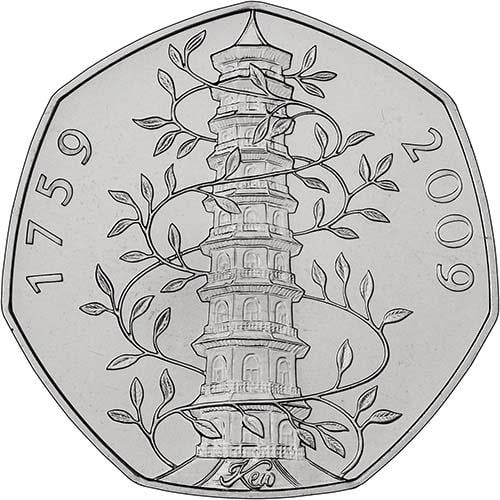 On the reverse, designed by Christopher Le Brun RA, the Chinese Pagoda building is encircled by two entwined vines. The 9 of the 10 octagonal storeys of the building are visible with three of the arches on each floor. Curiously, the ground floor of the building is missing from the coin. The roof of the bottom floor is visible and has the word Kew written across it. However, we do not see the columns below or the door to the building. The date 1759 (date of opening) appears on the left of the building and 2009 (date of 250th anniversary) appears to its right.

This coin was minted in five varieties. In addition to the circulated coins, there were BU, Silver, Piedfort and Gold varieties issued by the Royal Mint.

The gold proof Kew Gardens 50p coin comes in a fine wooden presentation case and is accompanied by an authenication card bearing the issue number of the coin. One of these coins sold at a Royal Mint auction at the end of last year for £1,800. A steal compared to some sellers who are asking £10,000!

The silver proof piedfort version of the coin sits in a black presentation box with authenication card. The authentication card should bear the Royal Mint logo and the issue number of the coin. This popular version of the coin apparently sold for £490 at the end of 2019 and before that hadn't really been seen since one sold at auction in 2018 for just £160. So, as you can see, it rarely comes up and is growing in value rapidly!

The silver proof coin comes in a presentation box with authentication card. In the summer of 2019, one of these was snapped up at auction for £150. Well up from March 2015 when some lucky soul managed to scoop one for just £95! Clearly, 50p fever is working wonders on the value of these coins.

The BU coin was distributed by the Royal Mint in a limited edition pack. The coin was sealed into presentation booklet with information about Kew Gardens. There were only 50,000 of these packs produced by the Royal Mint and the other BU coins minted were distributed to other sellers to be packaged. An uncirculated Kew Gardens 50p sold at auction for £95 in December last year but in a good condition Royal Mint limited edition pack they can fetch around £200!

The lovely Pagoda building portrayed on the coin is just the beginning of what Kew Gardens has to offer. It is an UNESCO World Heritage site with over 50,000 plants in its botanical collections. Vast and beautiful, the gardens encompass Victorian glasshouses, 37 acre natural woodland, Alpine rock gardens and a stunning Arboretum with 14,000 trees. With all of this to see, it isn’t surprising that the gardens attract over 2.1 million visitors a year.

But Kew isn’t just a beautiful place to visit. It is an internationally important botanical research and education institution. With more than 350 scientists, Kew Gardens is a research powerhouse that covers global issues such as the impact of climate change on threatened habitats, the discovery and identification of new species and banking the world’s seeds as part of the largest plant conservation programme on the planet (the Millennium Seed Bank Partnership). 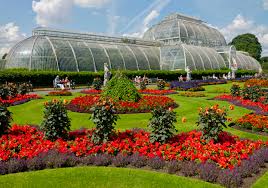 Founded in 1759 by Henry, Lord Capell of Tewkesbury, the gardens were originally separate royal estates that were combined to create the massive 326 acre site. Over their 250 years, the gardens have evolved into a quirky little community with an interesting back story!

Certainly, a place worth celebrating. To get your hands on a piece of numismatic and botanical history, you can always try to find one yourself or you can join our waiting list and be first to hear when we come across one! Just follow this link to the 2009 UK Coin 50p BU Kew Gardens - Uncirculated or 2009 50p Coin Kew Gardens - Ordinary Circulation and click on 'Email me when back in stock'.