Actually, we will pay £224.85* today for any one pound coins with the St George and the Dragon reverse! Possibly even more depending on their grade and rarity. Of course this price does fluctuate according to the live gold price.

You have probably guessed that we are talking about the original one pound coin – the modern sovereign. As numismatists, we find it frustrating when the media talk about pound coins in an all-encompassing term.

The round pound which has recently ceased to be legal tender was introduced in 1983 is the modern one pound coin. This £1 coin replaced the one pound banknote which had become expensive to produce. The modern round pound was cheap to manufacture and was durable – indeed, some 1983 coins were still appearing in change until it was recently withdrawn from circulation. Whilst these are pound coins, it is not the only pound coin or indeed the flagship coin of Great Britain, the sovereign.

The first pound coin was issued in the reign of Henry VII in 1489 as a hammered gold coin called a sovereign. This sovereign was the first coin to have a value of one pound sterling. This hammered gold sovereign weighed 240 grains (equivalent to 0.5 troy ounces or 15.55 grams) and was made using the standard gold coinage alloy of 23 carat, 0.9583% fineness. The obverse displayed an engraving of the king sat on his throne and the reverse featured the Royal Arms of England within a double Tudor rose. This sovereign had been introduced to show the rest of the world that England was a powerful and successful trading nation. The hammered sovereign was eventually replaced by the Unite and Laurel coins. 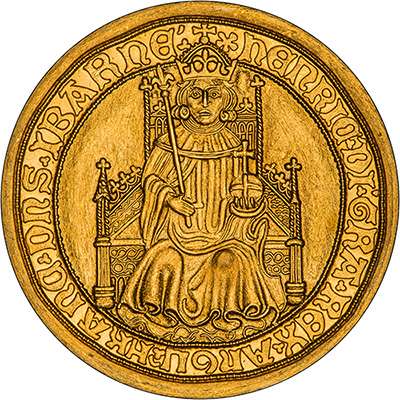 The Introduction of the Modern Sovereign

Britain paid a high cost for its involvement in the Napoleonic Wars including a huge shortage of coins. The government commissioned an overhaul of British coinage - this became known as the Coinage Act of 1816 or the Liverpool Act. A new set of coins was introduced including the sovereign in 1817. The sovereign was issued for circulation with a nominal value of one pound and was used until the middle of World War One in England.

So, How Much Is My Round Pound Worth?

It's important to remember that many of the modern round pounds were issued in huge quantities. The mintage figure for the 1983 £1 coin is 443,053,510! Although these £1 coins are no longer British legal tender, there will no doubt be lots of coins sitting in piggy banks, change jars and down the back of the sofa throughout the country.

We would pay £1 for £1 coin. Now that these modern £1 coins have been withdrawn, coin collectors are keen to collect a full set. As time passes, there will gradually be fewer coins to choose from. To these collectors, the amount they will pay for a coin will depend on the condition and rarity of the coin. On ebay the 1983 £1 coin may fetch £2-3 but a 2011 £1 in an uncirculated condition could achieve £20-30, maybe even more if the right buyer comes along.

Don't forget, a number of variations of the £1 coin were issued each year including:

If you do consider selling on an auction site such as ebay, we would suggest that you take a look at the Completed Listings (you can find this if you click on the Advanced Search button). Look at the Auction Sale prices, not the Buy It Now as many of these are simply listings which have expired. The prices achieved will give you an idea of what you could hope to achieve if you choose to sell your pound coin. Supply and demand will also be another factor in how much your pound coin is worth, so if you see a lot of the same year, maybe wait a while before you sell.

Here you can see how the Chards Team are giving back to their community through local events and fundraising.

Today we're talking to our Sales and Marketing Manager, Adam.