An offensive in the Idlib province, in North West Syria, by the Syrian Arab Army (SAA) has caused Turkey to actively engage in direct conflict with forces loyal to Syrian President Bashar al-Assad. The majority of the Idlib province is under the control of Tahrir al-Sham (Al-Nusra Front) and other Turkish-backed jihadists, and the recent attacks by the SAA has forced Turkey to deploy more ground troops in the province. The Syrian regime has vowed to take back all of its sovereign territory it lost control of during the civil war.

The Syrian Army offensive is backed by the Russian Air Force and has the potential to cause another wave of migrants rushing towards Europe. Turkey already hosts over three million Syrian refugees as a result of the conflict, with estimates suggesting up to one million people have already fled towards the Turkish border as a result of this latest SAA offensive.

Understandably, these developments have European leaders worried. The foreign minister of Germany, Heiko Maas, stated last week that the attacks “must have an end”, adding that Germany is doing as much as possible “to afford contributions to de-escalation". Growth in the eurozone is already at its lowest level since the sovereign debt crisis seven years ago and the euro dropped to two-year lows against the dollar. Currently the euro is trading at €1.0839 against the dollar, which is a fall of 2.27% over the last month. Gold is currently trading at €1,458.85 per troy ounce, which is just shy of an all-time record price denominated in euros. With this unfavourable economic data, the last thing European leaders need is another migrant crisis on their doorsteps, especially with the rise of populist political parties across the continent. 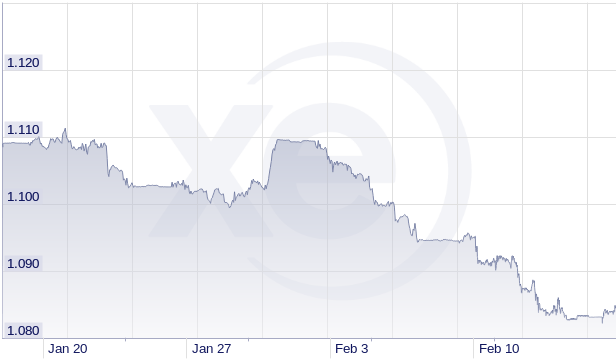