The British government has threatened to walk away from trade talks with the European Union in June if sufficient progress is not made.

The Prime Minister, Alexander “Boris” Johnson, has hardened attitudes towards the EU and stated the United Kingdom will not follow existing EU rules after the end of the transition phase. This could see the UK diverge significantly from EU standards in such areas like state aid, fishing, financial services and labour laws. However, Mr Johnson reiterated that the UK would retain mutual standards in these sectors. In turn, the EU Commission is insisting on the continued oversight of the European Court of Justice, full access to UK fishing zones and a general “level playing field” on law and regulations.

Talks begun in earnest on the 3rd March. Both sides have dug in and issued red lines, with the two parties accusing the other of unrealistic demands and expectations. It appears both sides are adopting the “let's have our cake and eat it” approach, which one would hope is just bluster before the serious negotiations began. 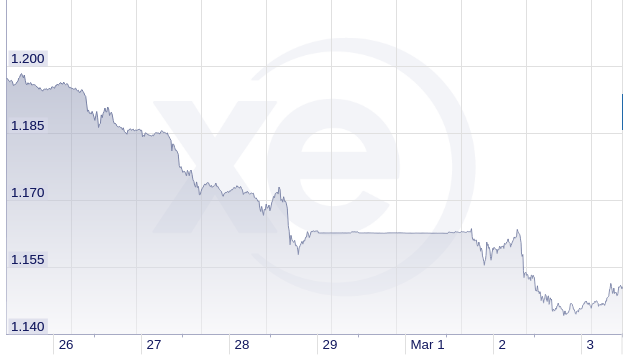 The Pound Sterling has been sliding against the euro on the back of these developments. One pound is worth €1.15, which represents a fall of 3.52% over the last week. Sterling had been quietly strengthening against the common currency over the last six months, but this setback for the pound is likely a representation of the difficulty Britain faces in these negotiations.

You may be interested in exploring articles in our precious metal and coin news section of the website.