The Pound Sterling continued its revival despite all the twists and turns of recent political events. Optimism is high after a new deal was struck between the United Kingdom and the European Union, but this could be shortlived with the terms needing to be first approved by Parliament. The “Super Saturday” did not quite live up to expectations, with the Prime Minister Alexander Johnson (aka “Boris”) outflanked yet again. The new deal failed to get a meaningful vote due to some crafty amendments from backbench MPs, which withholds formal approval of the deal until the full withdrawal bill has been passed. This forced Mr Johnson, as per the Benn Act, to write a letter asking the EU to push back Britain’s withdrawal date.

Mr Johnson remains defiant insisting he has the necessary support in the House of Commons to pass his deal. Despite his confidence, the Speaker, John Bercow, has refused a government request to hold a vote on it. Notably, he wrote a series of letters to the European Commission in which he left the one asking for a delay unsigned and then followed that up with a signed letter arguing against a delay.

One would expect Sterling to be extremely volatile given this political merry-go-round, but it has dumbfounded market analysts by maintaining its gains over the last week. The Pound is currently trading at $1.30 against the US dollar, a rise of 3.54% over the last week, with the Sterling Gold price responding with a fall of 3.65%, leaving its current value at £1148.28. The markets seem confident that the new deal will pass, or the UK withdrawal day will be once again delayed, but do not be surprised if there is another twist in this saga which sees the gold price rise again. 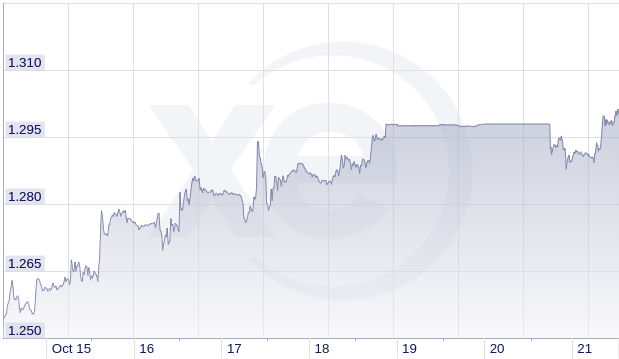