Gold has broken the price record in pounds sterling set back in September 2011 reaching an intraday high of £1194.12 per ounce this morning. Gold price remains high in both US Dollars and Euros and due to currency exchange rates, it is only the pound to set new records today. 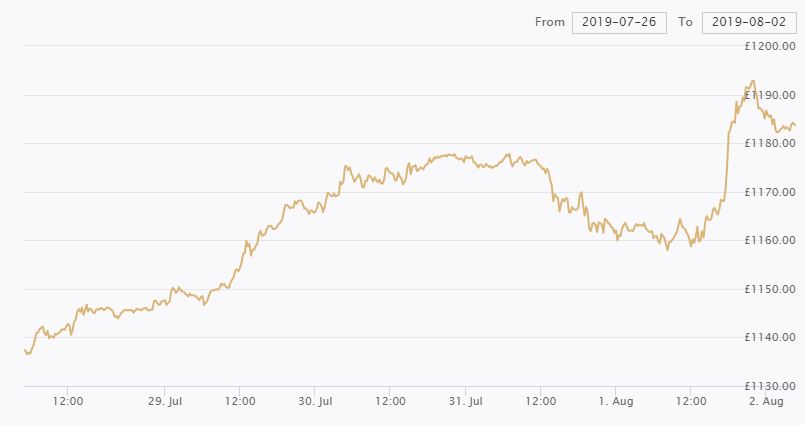 Sterling has sunk to almost record lows as Boris Johnson's government toughens their stance on Brexit causing tension with Ireland and losing a key Tory seat in Wales. The government is now only 1 seat in majority after losing the Brecon seat. The Pound has shed more than 18% since the referendum vote falling from $1.4861 since June 2016..

Donald Trump has imposed a further 10% tariff on $300bn of Chinese goods coming into the US. He claims the Chinese government are non-committal and that negotiators are unable to strike a mutually acceptable deal. I will update this page once I understand further which goods are to have tariffs placed on them and it is likely to be met with retaliation from Beijing.

Sterling dropped to a low of $1.20915 helping push the price of gold per ounce up to a new record high of £1194.12 before a slight correction back below £1190. This is the highest intraday trading price of all time and we expect today's LBMA fix to beat the current record of £1182.82 per ounce set on 6th September 2011 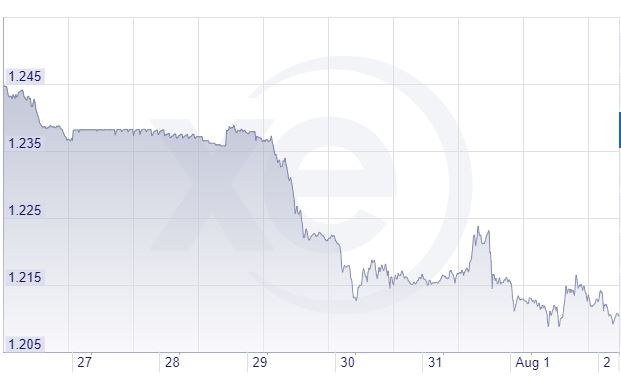 Boris has appointed several hard-line Brexiteers to the cabinet including Dominic Raab and Jacob Rees-Moog who collectively are calling bluff on Brussels and demanding the backstop arrangement be removed or amended. It is unlikely that Brussels will budge on this based on previous media reports so a no-deal Brexit is looking increasingly likely.

Sajid Javid has been making allowances in the UK budget even demanding HMRC make plans for such an event. Commentators believe the UK is far better poised in terms of planning and desire to see no-deal Brexit through. The potential calamity for the domestic and EU wide economy should not be underestimated.

Investors have been piling into safe haven investments for months due to increased risks in the global economy now confirmed by central bank moves to inject cash and restart stimulus programs. The FED have issued a interest rate cut the first since 2008 which only adds more confidence that a downturn is on the cards.

A disorderly Brexit is going to hit the UK twice as hard if it occurs during a global downturn so this explains the popularity of gold and we can confirm our showroom is as busy as ever with customers looking to protect their wealth in the coming years.