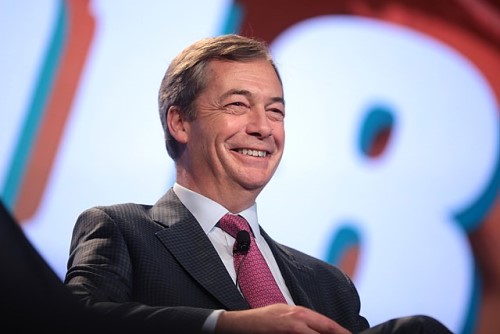 In conjunction with Southbank Investment Research, the former MEP and Brexit campaigner has begun issuing content for the new Fortune & Freedom website which aims to help regain control over their personal finances.

The website features articles on topics such as the EU (obviously), financial independence, and gold and commodities.

Farage, who spent time in the financial sector trading commodities before making a name for himself as a Member of the European Parliament, will not be giving investment advice himself, as he is not regulated to do so; but will be giving his views on politics and the financial markets.

Farage is no stranger to controversy, so it’s no wonder that his new venture has been met with some criticisms from some media establishments. A recent article by FT Alphaville is particularly sardonic, comparing Farage to a “gap year student” for being on a “vision quest” since his successful battle to remove Britain from the European Union. The website’s daily newsletter hopes to “provide all of us with some levity during these difficult times” according to Alphaville.

In a rather more objective piece, The Telegraph interviewed Farage about the new campaign asking the reasons why he has decided to embark on this project, to which Farage spoke about “standing up for the little guy” and the “years of regulation (that) haven’t protected us from the financial crisis”. On a personal note, Farage added:

“I paid money into a private pension and left someone to look after it. Now, 20 years later, I am looking at what I get back and I’m thinking, “Why did I bother?” There are millions of people aged 40 upwards in this position who feel let down by the industry. So, I want to demystify markets with high-quality research and I want to inspire people to take back control of their own money.”

Farage is also expecting to be working on articles relating to tax issues, the pandemic and lockdowns; plus, a view to the US election in the coming weeks.

Farage has been one of the most divisive figures in British and European politics, so now doubt he will be just as controversial in the financial industry. Recent years have given him enough support and criticism that any views he has will be met with some skepticism. Popular figures (or unpopular as the case may be), will always give their views on the latest hot topics, so there shouldn’t be any real surprise that Farage would again voice his opinions. Despite this, Farage does have considerable experience with trading in commodities, so this new move is not as radical as some might think.

As with any advice, financial or otherwise: Buyer Beware!

You may be interested in reading our precious metals and coin news articles.