January should see the release of the 2020 Royal Mint Bullion Sovereigns. As with last year, the Royal Mint has decided to keep with tradition with the ageless St George and the Dragon design by Benedetto Pistrucci. For British residents, gold investment sovereigns are exempt from Capital Gains Tax due to their Legal Tender status and are VAT-free. Chards offers these coins at a cheaper price than The Royal Mint’s RRP! 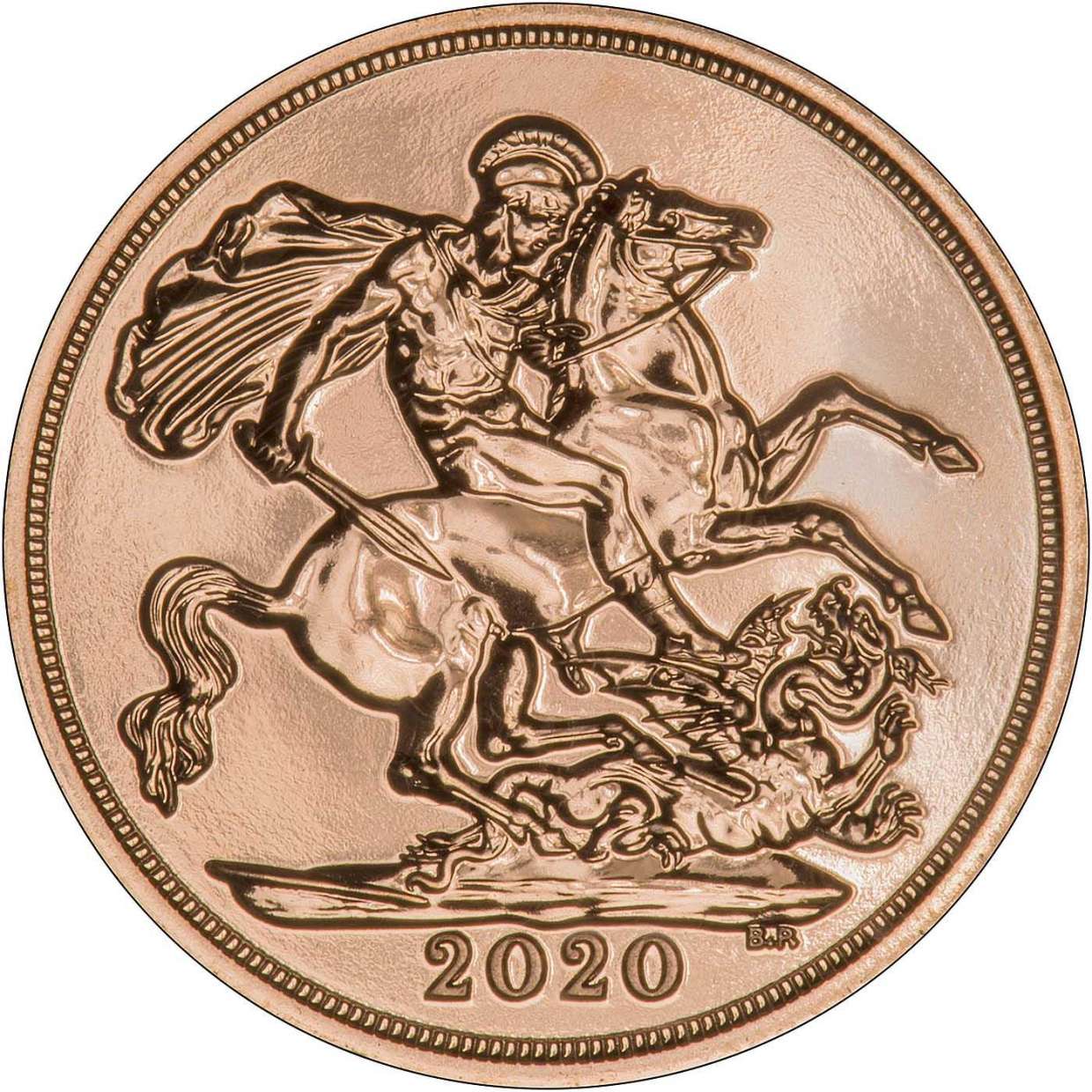 This is likely to be a popular choice for the gold investor looking to buy bullion at low premiums. Expected in January, these investment coins are one of the most iconic coins in the world. Struck in 22ct gold, each coin contains 0.2354 troy ounces of gold.

The 2020 Gold Proof Sovereign, issued by The Royal Mint, features a special cypher mint mark to celebrate the 200th anniversary since the death of King George III. The reverse of the coin shows the iconic St. George and the Dragon design by Benedetto Pistrucci. They come in a wooden presentation box with a certificate of authenticity.

This full proof sovereign has a much lower mintage than in previous years. There will be 7,995 of the coins issued in their individual presentation boxes. The total mintage figure is just 9,905 - the lowest mintage since the 2016 proof sovereign. 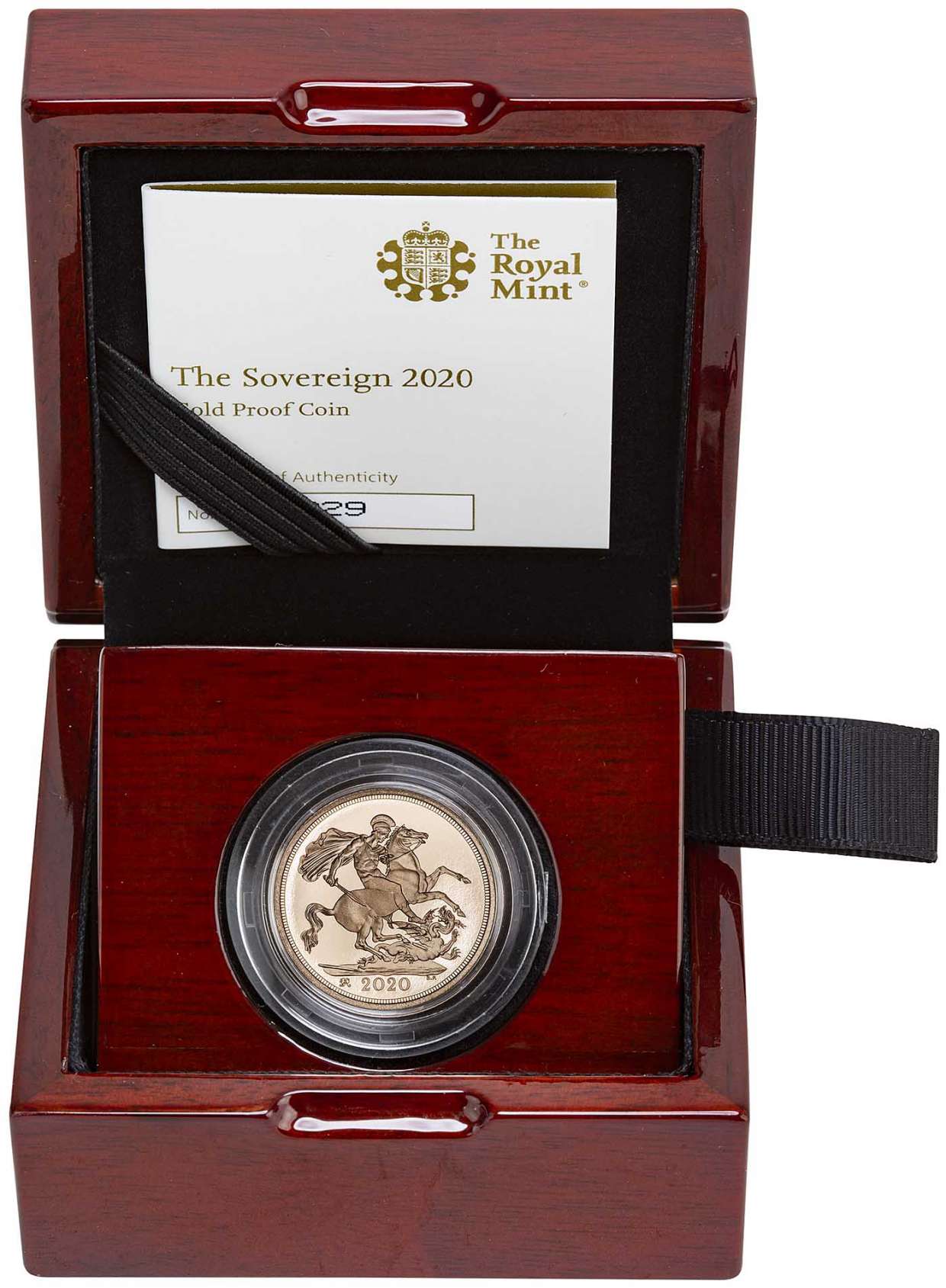 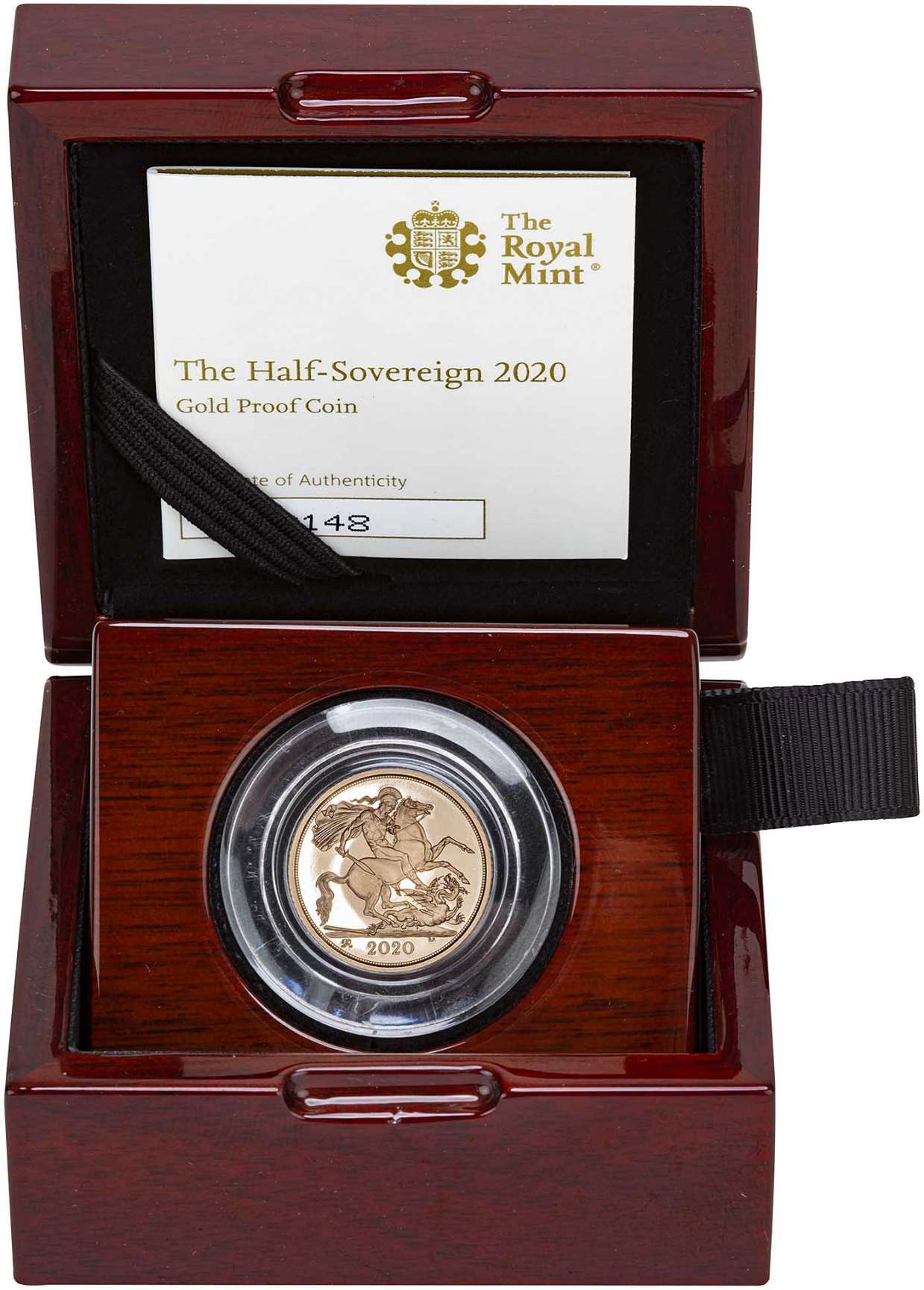 Like the Gold Full Proof Sovereign, this coin features a special cypher mint mark on the reverse commemorating 200 years since the death of King George III. The coins come in a wooden presentation case and is issued with a certificate of authenticity from The Royal Mint.

This 2020 Three Coin Standard Proof Sovereign Set includes a full sovereign, half sovereign and quarter sovereign, all struck to a proof finish. All coins feature a special cypher mint mark on the reverse to mark the 200th anniversary of the death of King George III.

The proof quarter sovereign is not issued individually this year and is only available as part of the sovereign sets.

This is the only 3-coin sovereign set to be released in 2020. The Royal Mint are no longer producing the premium 3-coin sets. The sets have a mintage of just 750. 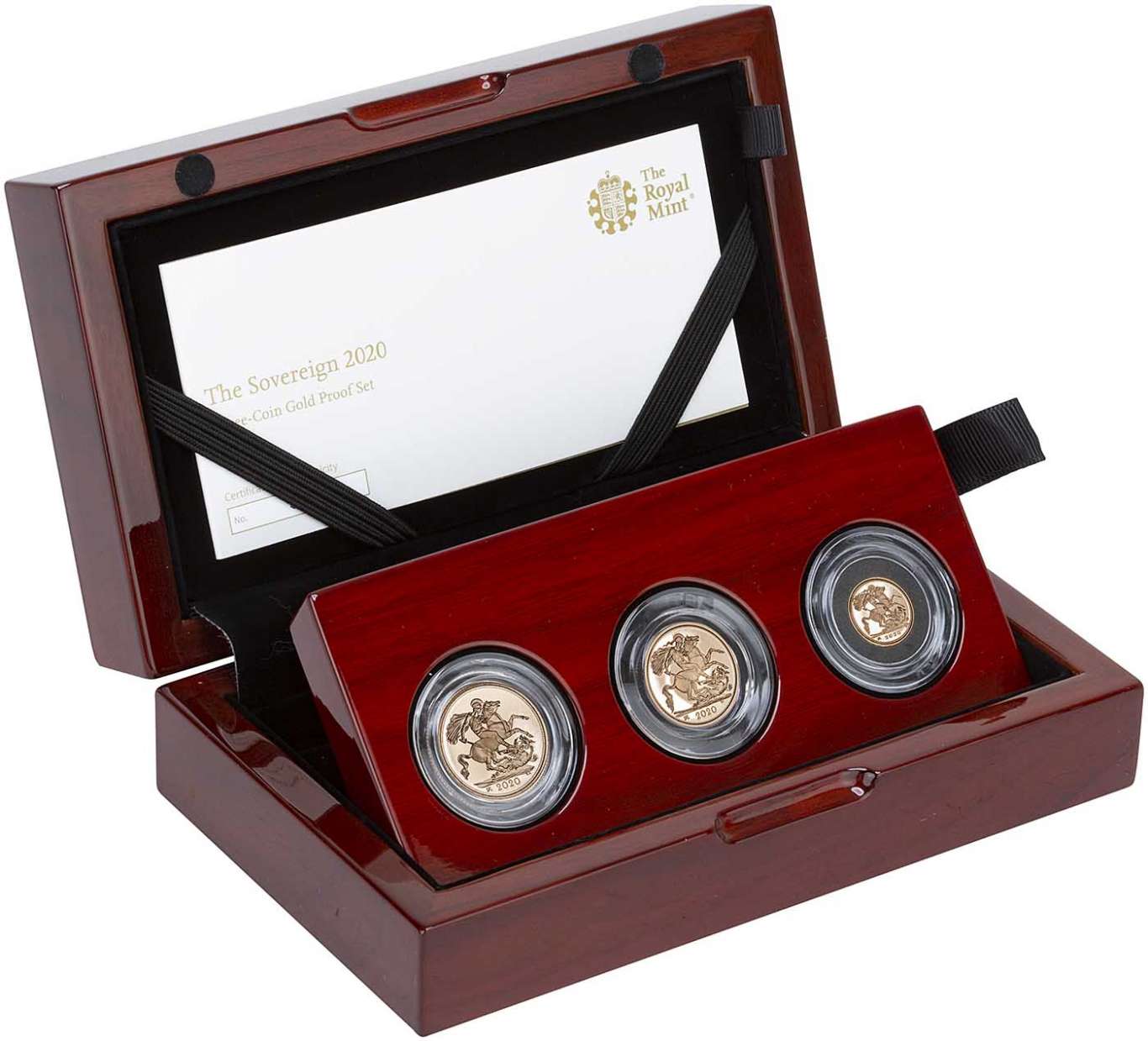 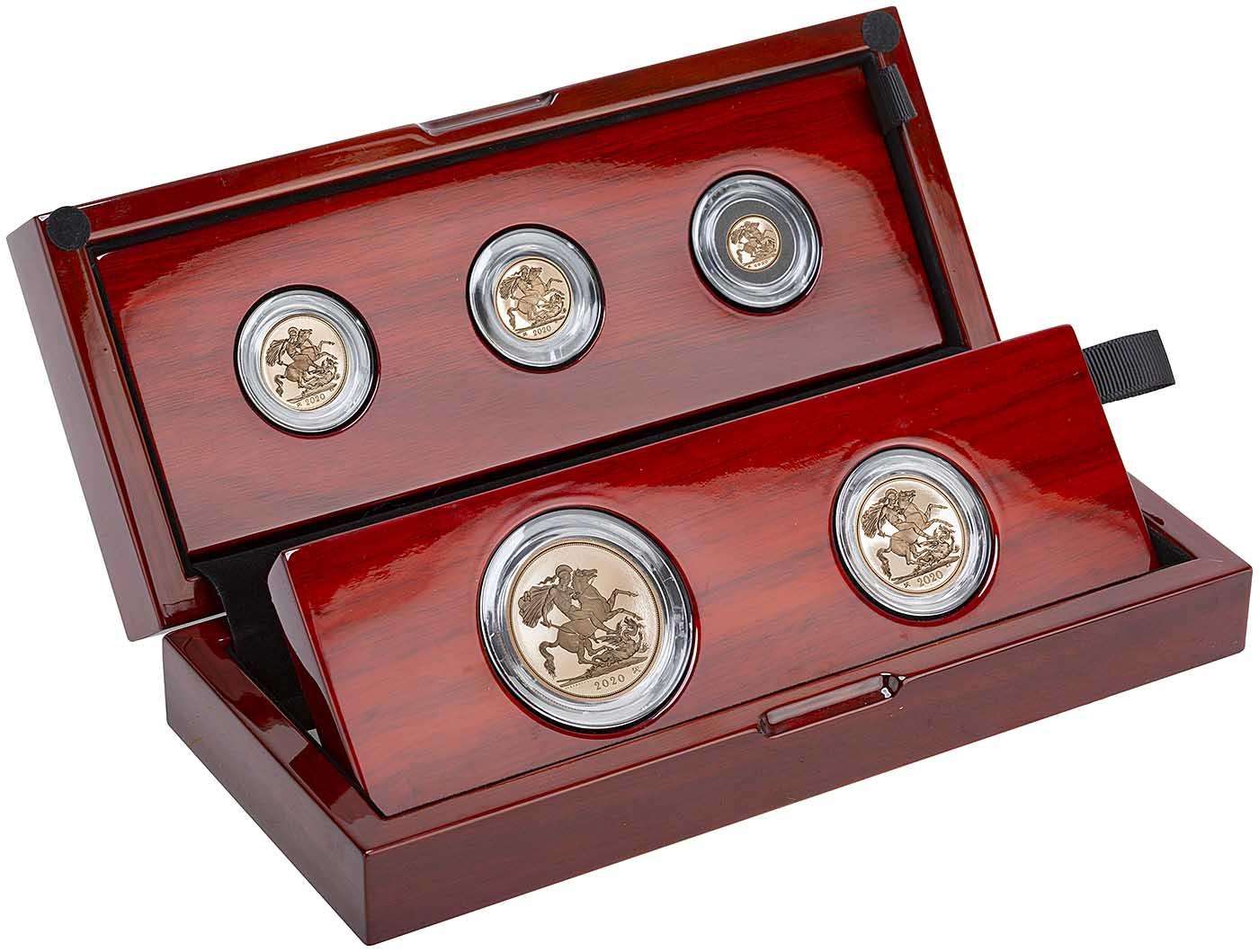 This is the annual 2020 Five Coin Proof Sovereign Set. All these proof coins feature a cypher mint mark to commemorate the 200th anniversary since the death of King George III.

The set consists of a quintuple, double, full, half and quarter sovereign, which have legal tender values of £5, £2, £1, half a pound and a quarter of a pound respectively. All the coins are issued in a proof finish. The sets have a limited edition presentation of just 500.

Proof sovereigns are very popular with coin collectors. These coins are struck between four and six times using specially polished dies to achieve the high definition of the design. The modern proof sovereign features a frosted design and inscription against a mirror-type background. It takes longer to produce these high-quality coins and the mintages are generally low compared to the bullion uncirculated sovereigns. This is reflected in the issue price which is substantially higher than bullion sovereigns which are sold as investment gold.

Proof sovereigns tend to be collectable gold coins. Some years have proved to be highly prized with collectors, for example, the 1989 Proof Sovereign which marks 500 years since the first gold sovereign was issued under King Henry VII or the 2017 Proof Sovereign which commemorates the 200th Anniversary of the modern sovereign issued under King George III. Often collectors buy proof sovereigns for special occasions, or just simply enjoy adding a new high-quality coin to their collection each year. For those looking to buy gold for investment purposes, bullion sovereigns are more appropriate given their lower premiums and they represent a better value deal for the gold content in them.

If you are interested in purchasing any of these coins, please see our 2020 Sovereign Coin Collection page.

We have a dedicated Sovereign Information page for more details on the history of the sovereign coin.

You may be interested in exploring articles in our precious metal and coin news section of the website.