This week we're talking to Corey. He's our Economics Analyst and has the best accent out of the whole team. 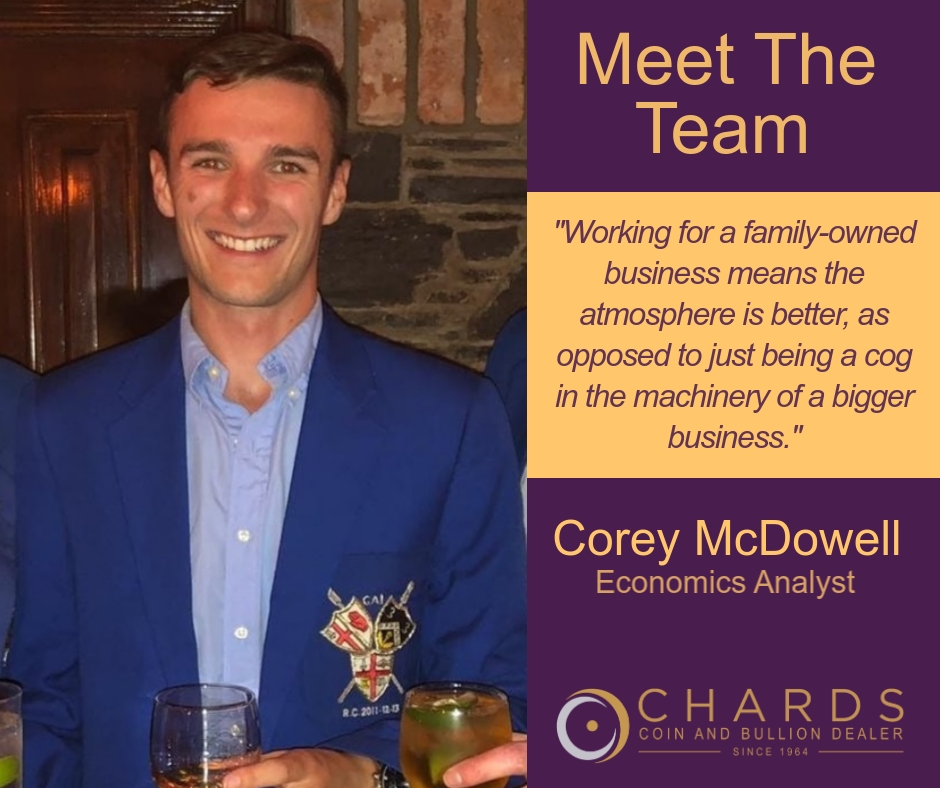 I’m originally from Portstewart, Northern Ireland. The accent is something you don’t lose!

What made you move to over here?

It was by chance really. I was in between jobs and had put my CV into Chards, not expecting much. A couple of months down the line and I’m now living in Poulton!

Are you enjoying living here?

I actually really like the area. Being from a small seaside town, it really reminds me of home. People back in Northern Ireland will appreciate when I say Blackpool is just Portrush on a grander scale. Plus having national parks like the Lake District nearby is a big bonus. But perhaps the biggest draw is how friendly Lancastrians are!

What do you do at Chards?

My role is as an economic analyst, which involves me working primarily in the investment side of the business. The role can be quite broad though, which is a nice thing because it means every day is different.

How did you get into economics?

It was initially to complement my interest of politics, but thankfully I saw sense and devoted my time and energy to a proper subject! I felt increasingly detached from politics and decided that I'd enjoy studying economics more. The more Iearn about the subject, the less I know.

What's the best thing about working at Chards?

The antics in the office! I’m definitely receiving karma from all the pranks and practical jokes I played on people when I was at university. Plus, working for a family-owned business means the atmosphere is better, as opposed to just being a cog in the machinery of a bigger business.

There’s so many to choose from... I tend to like the more historical gold and silver coins more than the modern bullion ones. If I had to pick, I’d choose the Victoria Shield Back Sovereigns - I’m a big fan of how the crowned shield from the Royal Coat of Arms is depicted on it.

What are you missing most during lockdown?

In all seriousness, probably seeing friends and family. I’m not a fan of working from home, because I love working in an environment where you can interact with people face-to-face. I hope we can move back to a situation soon where such actions like being within 6ft of someone else and going to the beach on a sunny day are no longer seen as controversial.

What are your top 3 things to make lockdown pass?

1/ James Rickards’ books are an excellent read on economics and geopolitics. He has the ability to explain complex concepts in clear, plain English, which makes for compelling reading.

2/ South Park and Classic Simpsons never fail to make me laugh. Watching them both is a great way to unwind in the evening.

3/ I’m doing a fair bit of running now. Not a lot, but just enough to remind myself how unfit I am!

One thing you didn’t know about the coin / bullion industry before working at Chards?

I wasn’t aware of the advantages of buying coins over bars and I used to think it didn’t really matter when buying physical bullion. But I became aware of the benefits of possessing coins, such as sovereigns and Britannias, over bars as British coins have tax advantages and lower premiums/spreads which you don’t get with buying bullion bars.

What would you be doing if you weren’t working at Chards?

That’s a tough one - I’m not entirely sure. I did toy with ideas of being a teacher or joining the armed forces, so I suppose it’d probably have been down either of those routes.

Do you have any interesting hobbies?

I used to do rowing pretty seriously. I’m still like to get out on the river when I can but unfortunately those opportunities are now quite rare. I also miss being incredibly fit - the older I get, the better I was...

What about any interesting/useless talents?

I’ve recently discovered I can grow an above-average beard. I suppose that’s a talent!

Today's Meet The Team is Kieran! Kieran is our Warehouse Lead and resident coin collector - if there is anything you need to know about 50p's, he probably has the answer!

This week we're talking to our Operations Manager, Rochelle! She's been with the company for over 11 years so knows (almost) as much as Lawrence.

This week we're talking to Phil, our Warehouse Operative and Tech Support guy.

This week we're talking to Robyn! She's one of our lovely Customer Service Advisors. If you've phoned up the showroom, or visited us pre-lockdown, you may have spoken to her!

Today's Meet The Team is our Sales Manager, Lesley! If you've phoned our showroom you've probably spoken to Lesley.

This week we're talking to Georgina. She's our bookkeeper and has been with the company for over 10 years.

This week we're talking to one of our Customer Service Advisors, Mandi.