Careful Italy, You Don’t Want a Brown Bottom Do You?

Many reading will be familiar with Gordon Brown (a.k.a Golden Brown) and his infamous set of auctions in which half of the UK’s gold reserves were sold, at approximately $260 per ounce, leaving the UK a small player in the global bank reserve league tables. This period has become commonly known as “Brown’s Bottom” and is met with vehement disbelief with the odd spattering of approval. It goes against the modus operandi of investing in which we buy low and sell high, with Gordon Brown instead deciding to sell at a 20-year low! You can see below how gold market was bearish and from 1980 to 2001 (ish) gold prices declined. 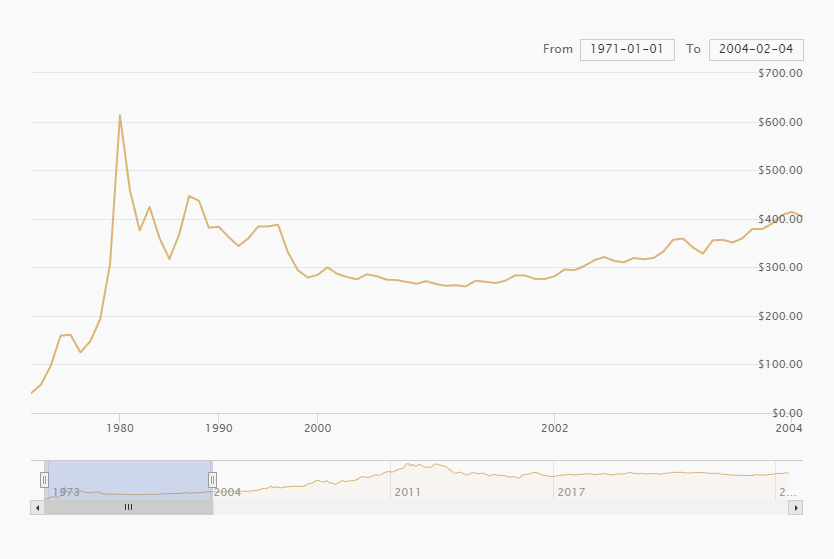 Everyone can have an opinion on this and debate it till your blue in the face, however, many world banks and financial institutions are still buying gold at a rapid pace as highlighted by the recent World Gold Council data, and it seems there is no less appetite for wealth preservation with gold now, as there was at the turn of the millennium……arguably more! All one must do is look at the price difference as gold is currently trading just over $1320 as I type this, which shows there is still demand left in the yellow metal.  It is true that modern monetary policy doesn’t require gold, just read up on fractional banking and quantitative easing if you have the nerves for it, but there is without doubt no let up in gold’s stability and purchasing power even with current geo-political chaos, in fact quite the contrary.  I am a firm believing in holding gold to preserve wealth and I would extrapolate this to the country if I had an ounce of power. It would provide buffers to cyclical capitalism and also allow us to service debt as and when required. Selling half of our entire gold reserve seems wild, to me at least, and in the name of what exactly? The story goes that is was to fund public finances under the then New Labour government or was it mere coincidence that the war on terror and the search for illusive weapons of mass destruction began only 18 months later, likely with funds set aside from “public finances”?

For contrast, here are the top 20 central bank gold holdings, as of February 2019, with all figures in tonnes:

You can see we have slipped out of the top 10 following the sell off and make no real attempts to stockpile further.

So, enough of the past why mention Italy in the present.

Well, it looks like Italian Deputy Prime Minister is eyeing up the gold reserves held by Italy’s central bank. As you can see above, Italy is the third largest holder of central bank gold in the world and Matteo Salvini claims the gold is the property of the Italian people and he is currently “studying” the notion that it can be sold for public spending. To a degree I see his angle as Italy is ravaged by levels of corruption and is at serious risk of recession in 2019, with the tax payers taking the brunt. What I don’t agree with is releasing the wealth stored in gold for short term political gains and appeasement of the electorate. What then when the cycle loops back, economic output slows, public spending freezes, joe public has to once again sell his gold necklaces and watches, where then can the central bank turn to service debt. The risk of default becomes even greater if a fine balance is not struck! The wider effects of a default by the third largest economy on the bloc are quite hard to fathom. Gordon Brown ignored the advice of banks and the World Gold Council before selling the UK reserves for what were short term gains in the foreign exchange market. Now with hindsight was it wise to sell so much?

In conclusion, Italy please review this case. What might seem a necessity to sell right now might come around to leave you cornered in the future! At least now you have plenty of reserves to stake out the longest of recessions and you are also hold more than most countries, including the UK, so in this context are better dressed to weather any storm. Be wary of radical political plans as the economics of the world don’t change over night and ideas that challenge the status quo should be carefully thought out and implemented with care. Often unfortunately they are not and either remain pie in the sky ideas or worse they leave economic scars across a country which take years to heal.