In January 2019 we discovered a major gold discrepancy in one of the worlds most recognised and trusted bullion coins - the South African 1oz Gold Krugerrand. Our internal checks found the coin to contain nearly 2% less gold than it should have! We suspected a fake or a low gold content and here we explain the steps we took to determine authenticity and quality.

We have on site X-ray diffraction technology and routinely test coins for metal content with confidence. We have no reason to question the accuracy as the kit is serviced and calibrated frequently and we take multiple daily decisions from the results. The initial test on the Krugerrand showed a low gold content therefore we performed further work even bringing in Sheffield Assay Office to get a third party to confirm our suspicions. 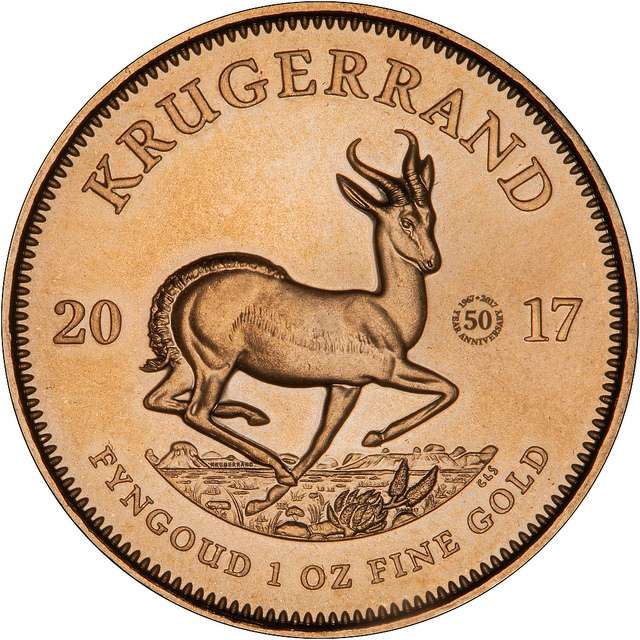 All shown as parts per thousand. The figures in brackets are tolerances.

To ensure the results were correct and there was not an issue with the Niton tester, we tested a series of coins from other world mints. These coins tested as expected.

We checked the gross weight of the Krugerrand using our highly accurate diamond carat scale. The result was 169.816cts (33.96 grams) which fits the correct specification.

After these findings we decided to test the coin further. If the metal for the blanks was alloyed or processed badly, it would be possible for a coin to give slightly different test results in different areas of the coins. We tested each side of the coin in 5 different places; the centre, 3, 6, 9 and 12 o'clock positions, and received similar results - none of which met the gold content that they should have.

All shown as parts per thousand. The figures in brackets are tolerances.

It is highly probable that our mean gold reading of 902.7 ppt is very close to the actual gold content. It should be 916.6 ppt, so is deficient by just over 1.5%, a serious and significant negative discrepancy

Coin blanks are not alloyed individually - they are made in batches. This means that a coin is extremely unlikely to be a single rogue error and there must be more coins that could be below their specified gold content.

We believe this probably only affects the 2017 1oz Gold 50th Anniversary Krugerrands. If you have one we suggest you contact your supplier to ask if they can test it, or take it elsewhere to be tested as we would be interested in the surface X-ray diffraction results. You need to specify that they do not acid test the coin as this will damage it.

This is not the first time Krugerrands have been noted as having an insufficient gold content. In 2011, some proof Krugerrands were discovered to be underweight in their gold content and we have performed an internet search for references yet nothing of any substance comes up in the search results.

In 2010 the specifications of three of the four sizes of Krugerrands, as published on the website of Rand Refineries, the promoters of Krugers, were discovered to be incorrect. The same incorrect information appeared on hundreds of websites worldwide. We were the first people to spot this; we contacted Rand Refineries with our research, and after initially referring us to their incorrect "specifications" page, eventually agreed with us and corrected their errors.

The Krugerrand was the original 1oz gold bullion coin, first minted in 1967. The coin still remains popular with investors due to its early uptake, worldwide promotion and recognition; although nowadays it has many competitors. To find such a large deficiency with its gold content is certainly cause for concern and we needed a third party to check the coin at this stage.

Response from The South African Mint

We contacted the South African Mint on Wednesday 30th January to report our findings, but have so far heard nothing.

At this year's World Money Fair in Berlin we visited their stand to ask about the matter. We were told that the technical people were in a meeting until 3pm, but they had our stand number and would come visit us. Sadly, no one from the South African Mint visited us. We can't help but feel like we were being fobbed off, or perhaps nobody at the Mint is taking the matter, or our information, seriously.

We sent the coin to Sheffield Assay for further analysis: 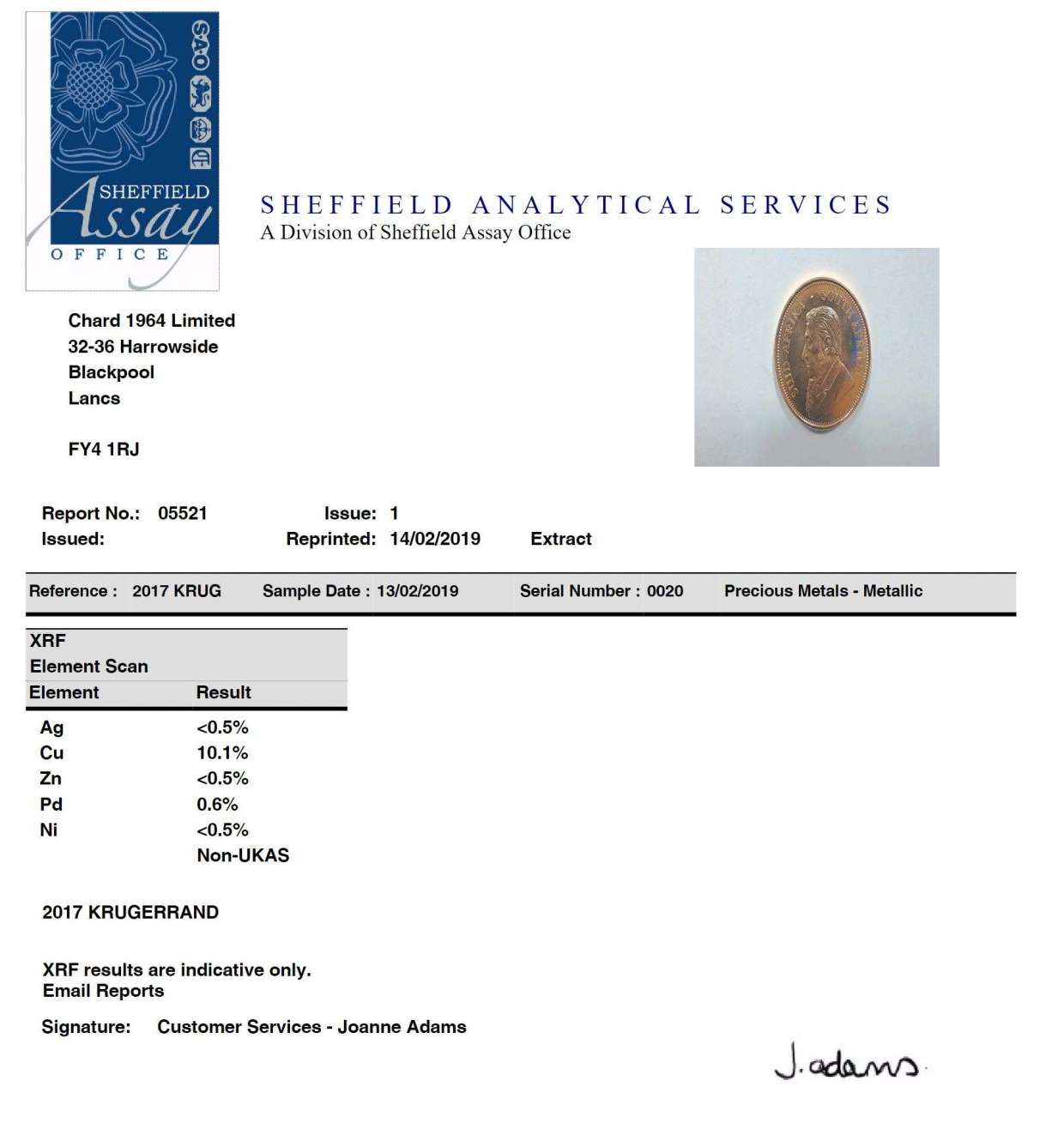 The 6 trials with XRF came out at 901-902 parts per thousand gold, confirming our suspicion. 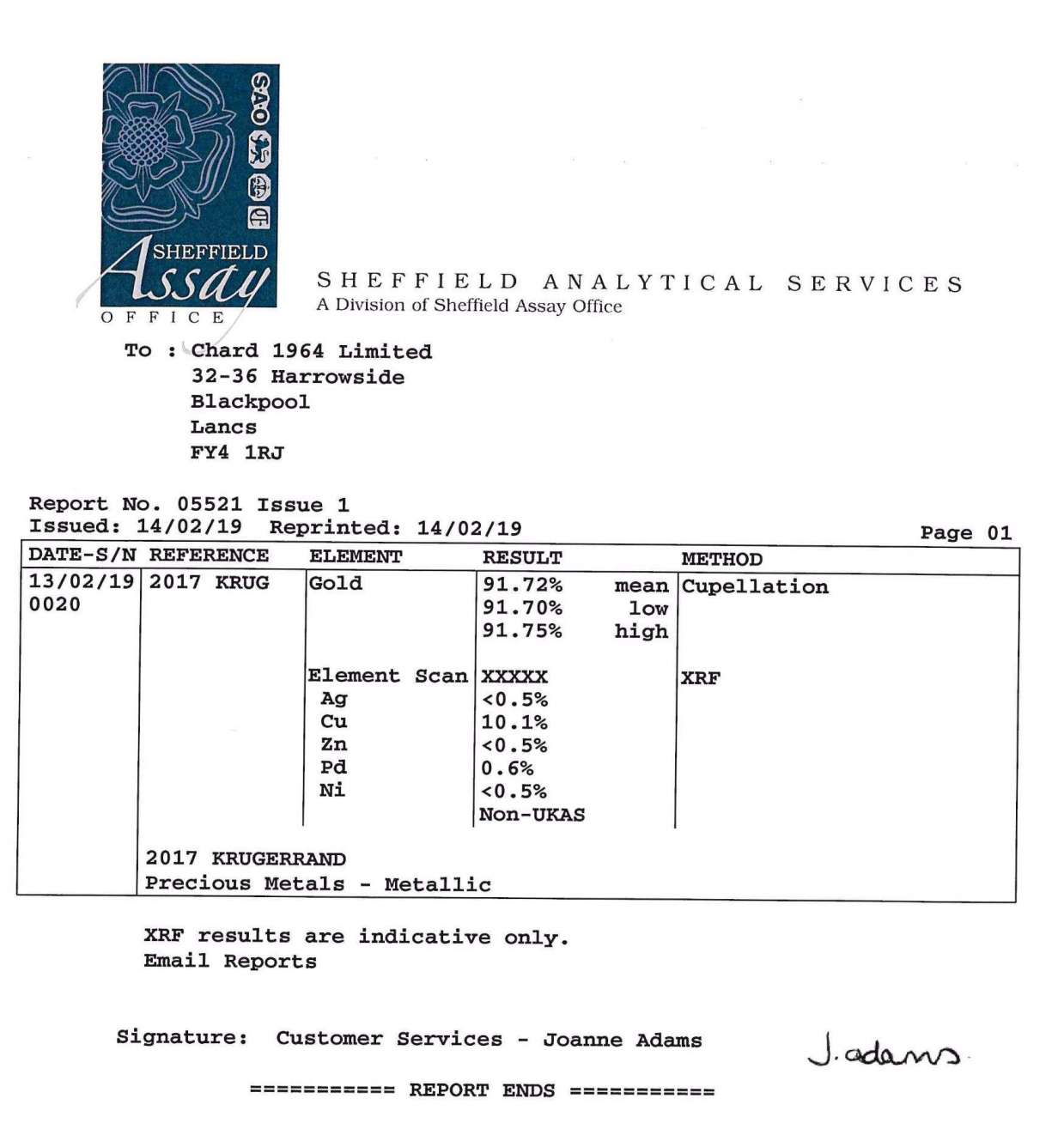 The cupellation results however, had a mean average of 91.72 parts gold, which is what we would expect from the coin. Whilst this is indeed an anticlimax, it's interesting to know that the assay office XRF machine gave the same results as ours and we can be confident with our results.

At Chard we're happy to test all incoming coins and take further steps if required to determine the quality of coins. X-ray diffraction is certainly a good indicator but not a definitive test and where we find something to be low gold content, we will investigate the matter, even if it means sending the coin for cupellation. We might be the only large bullion dealer in the UK with a robust quality testing procedure. 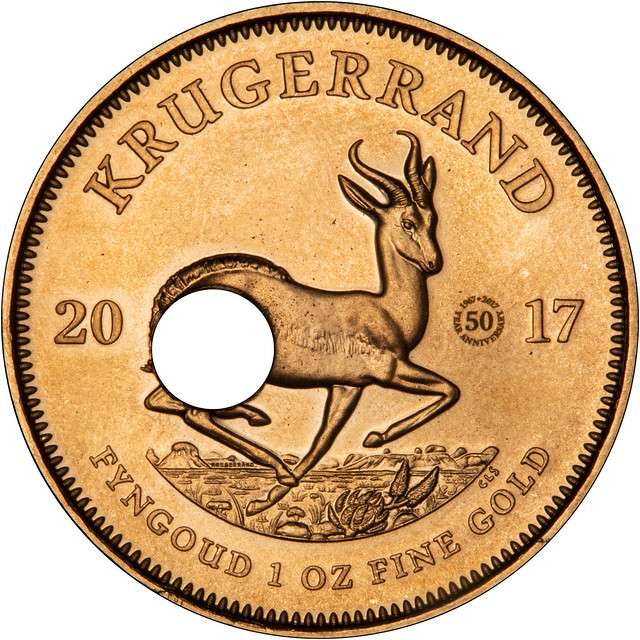 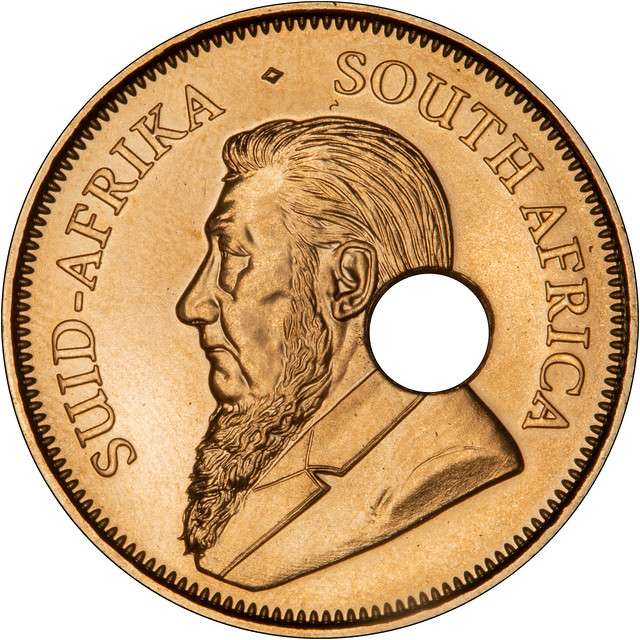 We spoke to Sheffield Assay Office Analytical Department, who have always been very helpful, and then subsequently submitted it to them for testing. Their X-Ray diffraction results were very similar to ours. The 6 trials with XRF came out at 901-902 parts per thousand gold, confirming our suspicion, but...

The cupellation results, had a mean average of 91.72 parts gold, which is what we would expect from the coin.

This does leave us wondering why the X-Ray diffraction results were consistently different, and we can wrap this up as follows:

Finally, we are happy to conclude that the Krugerrand is composed of 22 carat gold and that our initial concerns of low gold content are alleviated. If they had been true, the consequence for many investors who hold Krugerrands could have been serious and hopefully our readers now have an insight into our quality measures and steps we take to confirm authenticity and metal content. We might be one of the few bullion dealers in the UK who take these steps and if nothing else readers might have discovered something new in terms of coin testing methods - our staff certainly did!