The History of Silver

The History of Investment Silver

Silver is a valuable commodity that has been used for thousands of years. In ancient Egypt, Greece and China, silver ingots were used by merchants and officials to pay for trading transactions. It was first used as money in Lydia in the Persian Empire in the sixth century BC. This form of coinage spread around the world and became a common monetary trading facility. Silver coins continued to be used in coinage in Britain until 1946 when it was seen as an unnecessary extravagance in post-war Britain. Other countries soon followed suit and gradually silver coins were replaced by the cheaper and more durable cupro-nickel coins. 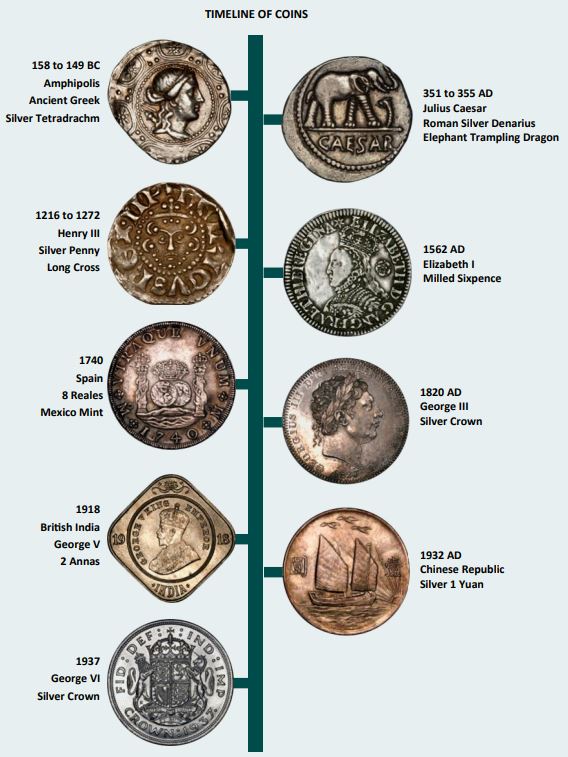 The introduction of one ounce gold coins in the late 1960’s had been welcomed by investors looking to buy investment gold bullion at low premiums above the intrinsic metal value. There had been many other historic coins to choose from eg. sovereigns and foreign gold coins such as Double Eagles, Swiss 20 Francs and Coronas, but the modern 1oz coins such as the Krugerrand provided investors with coins that were issued in a universal standard weight. However, investment silver was limited to silver bars or old circulation coins.

It wasn’t until the US Mint introduced the 1 oz silver Eagle in 1986 that investors were given the option for easily accessible investment silver in the same standard troy ounce weight as gold. Other mints followed suit; the Royal Canadian Mint with their Maple and the Royal Mint with the Britannia. It wasn’t long before all the major mints - excluding the South African Rand Refineries - brought out rival one ounce coins. Australia’s Perth Mint are probably one of the most respected refineries who are known for their consistently high production standard of bullion coins. In 1999, they introduced their first lunar coin which was available in a variety of sizes.

This was the first of several different ranges which have all been hugely successful.

These include the Kookaburra, Koala and more recently, the Kangaroo. Silver investment coins are struck once to an uncirculated finish. Mints such as the US Mint and the Royal Canadian Mint keep to the same design every year, although they do issue some coins with a privy mark. Some mints, such as the Bank of China and the Perth Mint, alter the design of the bullion coins each year.

Many of the earlier silver bullion coins are highly sought after by collectors who will pay higher premiums to add the coins to their collections, particularly if the coins are issued to a smaller mintage.

You may be interested in reading the rest of the articles in our silver guide.