Over 50 days have now passed since Alexander ‘Boris’ Johnson placed the United Kingdom into lockdown (or more accurately, shutdown). Since our last review at the end of March, gold has broken through the £1,400 price level and silver has recovered from its price collapse and is steadily creeping up in value again. 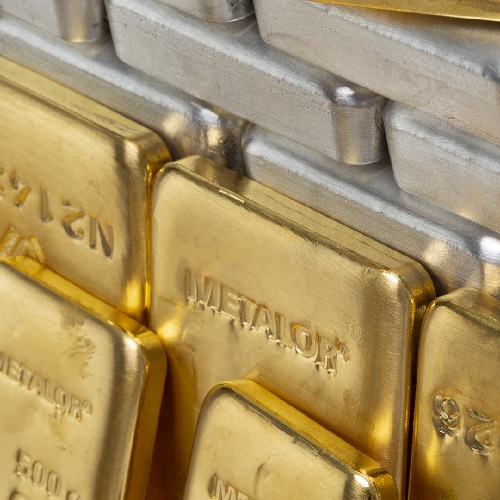 Gold continues to strengthen against all the main world currencies, with record prices being set in euros and the pound sterling in particular. The new record prices for both these currencies are now £1,440.46 and €1,613.80 per troy ounce respectively. 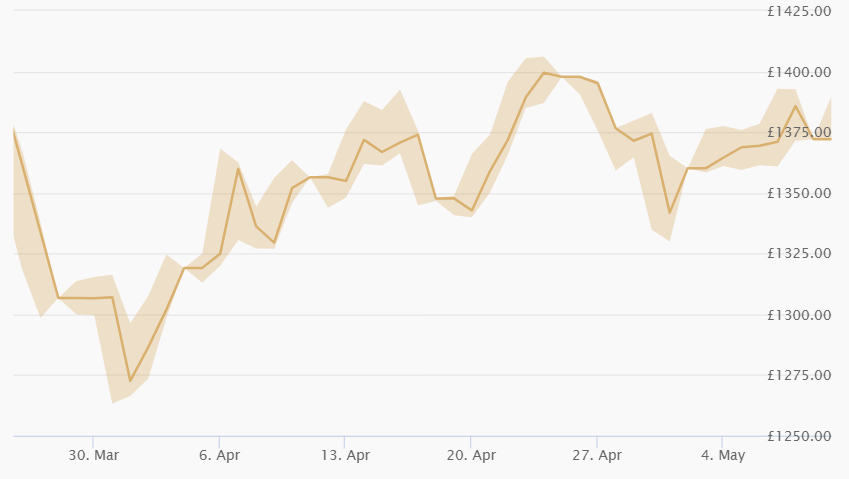 The latest LBMA fix (14th May) shows gold priced at £1,420.09 per troy ounce, which represents another psychological barrier being broken for the British currency. Gold still remains $164.90 off its record price in US dollars, being fixed at $1731.60 per ounce, so one could argue that both sterling and the euro are currently very weak.

The economic indicators coming out of the UK could possibly explain why sterling is so weak. Dire statistics are emerging from think tanks and official sources as to the damage being done to the UK economy, following the imposition of the lockdown, which might clarify why some British investors are buying up gold.

According to the Centre for Economics and Business Research, the government-imposed shutdown is costing £2.4 billion daily, which adds up to over £120 billion since it was enacted on the 23rd March. The think-tank predicted gross domestic product would decline by 31% in 2020 as restrictions prevent businesses from functioning properly. If true, this would be the biggest economic contraction for over 300 years. Whilst stock markets have ‘stabilised’, investors should be wary of dark clouds on the horizon for the economy.

The Bank of England has also released some damning data in its latest monetary policy report; it is expecting unemployment in Britain to more than double, rising from 4% in February to 9%. How accurate this forecast is remains to be seen, with growing concerns over the furlough scheme for workers. Analysts now believe that some workers on furlough will end up losing their jobs when the scheme comes to an end, or perhaps even sooner; this has already happened with airline staff for Ryanair and British Airways. The bank has also committed to £200 billion of money creation in its latest round of quantitative easing as well, further fuelling concerns about the state of the UK economy.

Positive news might be that inflows into gold ETFs remain strong according to the World Gold Council, with 170 tonnes being added in April. Globally, this would mean these gold ETFs would have record holdings of 3,355 tonnes, which should give confidence to the viability of these ETFs and reassure investors in paper gold. The demand for physical gold is extraordinary, but supplies are continuing to flow in within the market. As a bullion dealer in business for over 55 years, we at Chards can say with confidence that we don’t believe the market will dry up. For example, we have taken large deliveries of Gold Britannias and sovereigns, and we are hopeful of more bullion arriving soon to our Harrowside premises.

These British economic indicators, coupled with similar situations in other countries worldwide, might explain why the worldwide demand for gold is so strong. Gold is currently trading at £1,436.99 ($1,746.50) per troy ounce at the time of writing, and expectations are that this bull run for the famous yellow metal is only just beginning.

Silver has made a modest recovery priced in Sterling, hovering around the £13.64 ($16.55) per troy ounce mark at the time of writing. Being a precious metal with significant industrial uses, its price has been more volatile when compared against gold.

With the announcement of a pandemic by the World Health Organisation, has come the closure of many businesses. For some this closure is temporary but for many the outlook on current trading appears akin to that of the 2008/09 financial crises. The spot price of Silver experienced an 11 year low in March 2020, surpassing the crash experienced by the infamous recession that is still fresh in the memory of many. Despite the current economic downturn, the precious metal has enjoyed a small resurgence. The gold to silver ratio recorded its highest ever turn on March 18th at 126.70 and whilst it has more recently dipped to 105, analysts expect silver to close the gap with Gold over the coming months.

Clearly, investors are sharing the sentiment. During the initial days of the UK lockdown we were completely cleared of our silver bullion product range, with millions being spent on back ordered silver coins. The global shutdown of production means there has been a significant reduction in industrial demand for silver, a collective that usually consumes 70% of the world's supply. However, with 65.8% of the annual silver production having ground to a standstill, opportunistic bullion investors could be set to profit. 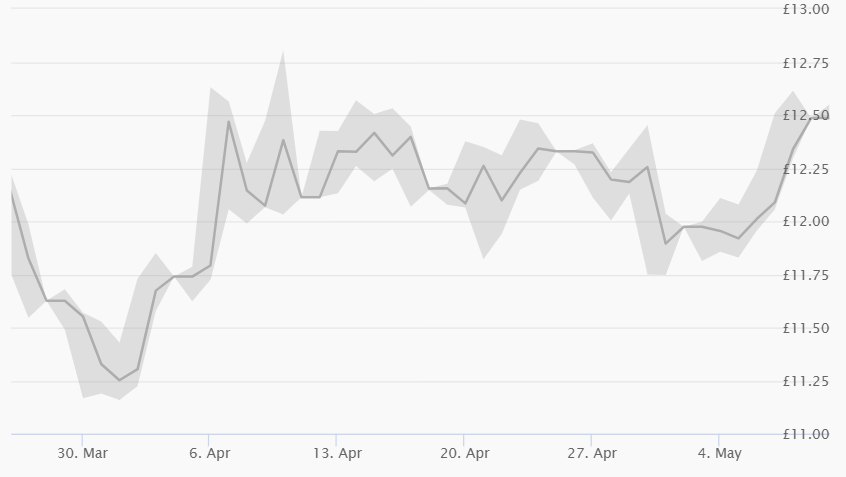 We maintain that nobody can see into the fog of the future and where silver prices will go, however, the secondary market silver products that we have bought in have not lasted long once we have put them up for sale!

Unfortunately, the story of platinumis still an echo of that of March, priced around £614.25 ($760.25) per troy ounce and looking very cheap indeed. Despite a strong rebound during the same period, palladium has been slipping down in value over the last month. Perhaps this is a result of uncertainty within the automotive industry, which is the main driver behind the demand for palladium.

The global health crisis has seen the world's largest producer of platinum, South Africa, close its mines thanks to strict lockdown measures. With the shutdown being implemented from March 27 the mines, which turn out approximately 78% and 36% of the world's platinum and palladium respectively, have been working to nullify the drop in supply by returning to operations at a 50% capacity since April 16. The Bank of America Merril Lynch (BAML) is predicting that we may have to wait up to 6 months to see production levels return to that of early 2020. These falls in output were mirrored by Anglo American Platinum who saw a 7% drop, with Impala Platinum following suit and reporting a 6% decrease.

Those looking to China's precious metal market rebound may feel optimistic about the future of its European counterparts. Unfortunately, due the nuances of the Asian manufacturing sector, their relative fortune can't be seen as a certain future for Europe. The platinum group metals' value can largely be attributed to its uses in motor vehicle production (if the jewellery sector is cast aside). Why is this important? The Asian car industry acquires its PGMs at spot price, akin to if you were to buy gold from a dealer such as ourselves. However, the North American and European counterparts are locked into long term supply contracts, making the current price of the commodity somewhat irrelevant to them. Also, whilst the supply of PGM may see a short term return to normalcy, or rather an attempt to do so, demand for the vehicles they produce will be minimal until these lockdown measures end.

It seems to be a similar situation to that of silver, with secondary market platinum being quite scarce at the moment. Historically, platinum has been valued high in times of strong economic growth and low during economic downturns, perhaps reflecting its exposure as a precious metal used for industrial purposes. At the time of writing, palladium is priced at £1,516.85 ($1,878.00) per troy ounce, which is a far cry from its peak of £2,232.55 in late February. We have a new Record Palladium Price and Historical Highs article for those who wish to read more about how the palladium bubble grew and burst. 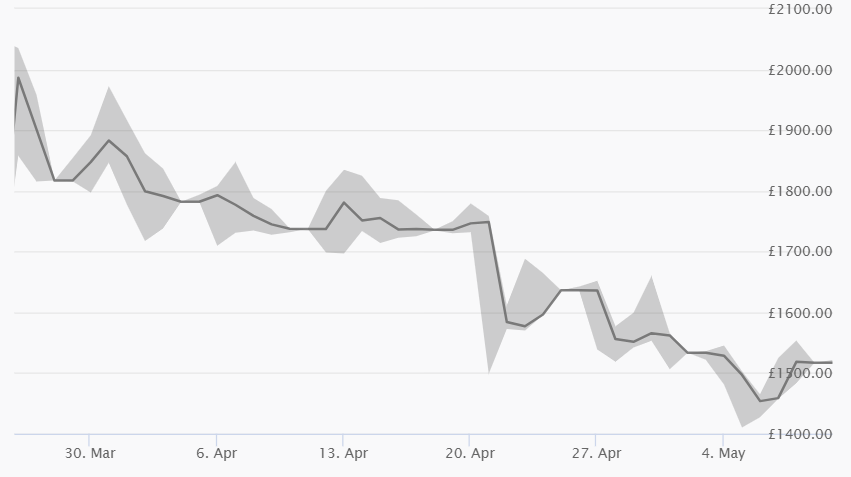 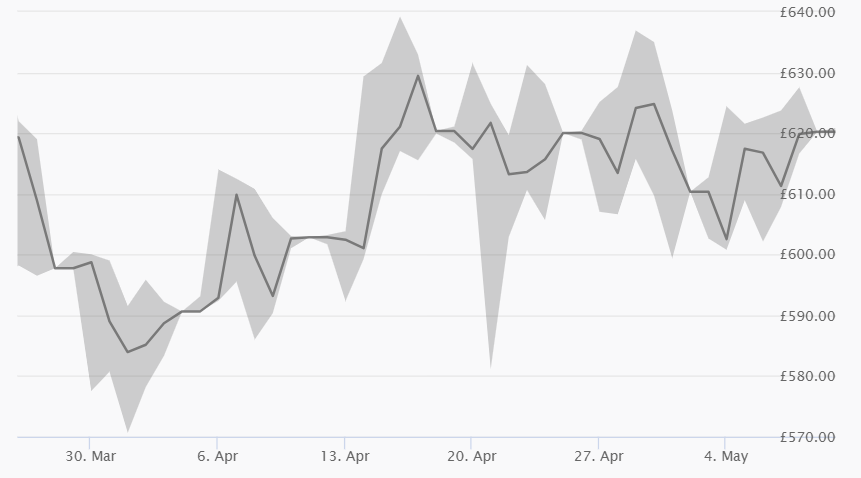 Our March 25th precious metals review can be found here.

With assistance from Adam Hopkin and Amy Billington.