Flexibility When Investing in Gold

It is worth being flexible when investing, as it is often possible to get a better deal. This can work for both buying and selling. 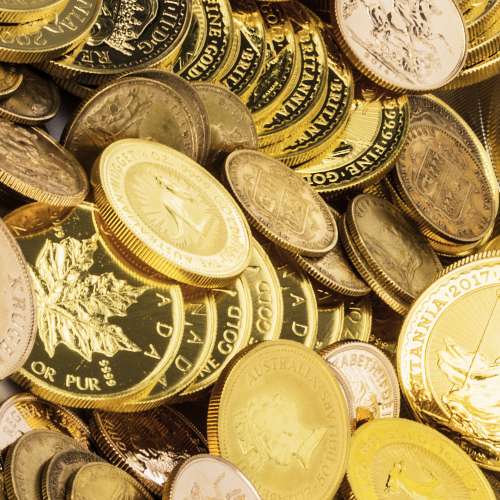 While Krugerrands are usually easy to recommend as a good way to buy physical gold bullion, there are other ways to invest in physical gold. A few years ago we created a slight price differential between Krugerrands and "our choice" of one ounce gold coins, with the "our choice" being at a small discount to the Krugerrand price. This rewards flexible customers, and helps us to keep our stocks better balanced.

We argue that although sovereigns usually trade at slightly higher premiums than Krugerrands, they are probably a better buy. A lot depends on the quantities, current market conditions, and relative premiums.

Our best value (lowest premium) offer on sovereigns is "our choice of date and type". To us it does not make much sense for the gold investor to pay a higher premium for one particular type compared with another type. There are exceptions, such as shield sovereigns, but this is venturing into the collectors market.

We can remember times when "old" sovereigns, meaning kings or Victorias, sold at a premium to "new" (Elizabeth II) sovereigns. Sometimes this would reverse, and "new" sovereigns went to a premium over "old" ones. Our advice to buyers at the time was always to buy the lower priced coins. We also used to co-operate with customers to "switch" between old and new whenever they could make a profit from it. Some customers would switch enthusiastically, others only reluctantly. The more flexible ones made good profits from it, for no risk.

Often, it is only mental laziness which leads some investors to demand one ounce gold coins. Sovereigns or other "old" coins are often a better buy, and sometimes fractional coins sizes can be a better deal. In gold bars, some countries only deal in metric bars, and so would not know what to do with a one ounce bar. Of course, it can also work the other way around. The residents of some countries seem to live in an "Imperial" world of miles, ounces, and gallons.

In the Event of Another Gold Rush

Between 1965 and 1974, gold rose from $35 per ounce to $850, 24 times the price. Absolutely mind-blowing for an ultra safe and "stable" commodity. Once it passed $100 and progressed upwards, the media jumped in, creating a classic bubble. The first item on the TV news each night was often "Gold hits new high" or similar. Over 4 million Krugerrands were minted in 1974 alone. It is not surprising then that there is a large pool of Krugerrands, and also sovereigns, in the secondary market. This is why sovereigns and Krugerrands have been cheap for the past 20 years, and why they both feature in our best buy list. If and when world demand increases to the point where this surplus pool dries up, then premiums will rise, and newly minted coins will be able to compete in price with existing coins. In this case, it would be silly to insist on Krugerrands, as many people now do. There are often other more desirable coins available, especially if there is a price difference. We for example would "push" Australian gold nuggets and lunars, as they are nicer than Krugerrands, and we are prime distributors in the UK for the Perth Mint. This means we can source brand new one ounce coins about 0.5% less than other gold bullion coins, with an even better saving on fractions, albeit at a higher premium.

It is also worth us pointing out that new sovereigns cost over 9% premium from the Royal Mint, on a 10,000 piece deal. Compare this with 3% for most one ounce gold bullion coins in equivalent prime size lots. As we usually sell bulk sovereigns at only about 1% higher premium than Krugerrands, compared with 6% more from their mints, this reinforces our opinion that sovereigns are currently a better buy.