Famous for being the King who abdicated the throne before his coronation in order to marry Wallis Simpson, the episode is one of the most controversial in the history of the British Monarchy, and is one which continues to haunt it down to the present day.

Born on the 23rd of June 1894 to the Duke and Duchess of York (later King George V and Queen Mary), Prince Edward was tutored at home until the age of 13, when he entered Osborne Naval College to train as an officer for the Royal Navy. In 1910, his grandfather Edward VII died and his father became King. The following year, Prince Edward was invested as Prince of Wales. Edward briefly served as a midshipman on the pre-dreadnought HMS Hindustan, before attending Magdelen college in Oxford. 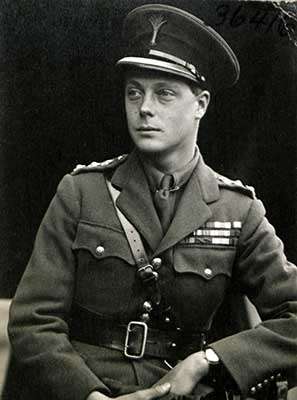 On the outbreak of war in August 1914, The Prince of Wales held a commission in the Grenadier Guards. Despite his wish to serve on the front line, he was expressly forbidden from doing so. In his attempt to persuade Lord Kitchener, the Secretary of State for War to allow him to fight, he said 'So what if I am killed? I have three brothers' to which Kitchener retorted that it was not the danger of the Prince being killed that was the issue, but the potential consequences of the heir to the throne of the British Empire being captured and used as a bargaining chip by Britain's enemies.

The Prince of Wales nevertheless spent his time in service touring the front line to raise morale, and observed the fighting at first hand, even though he did not participate. Following the war, the Prince of Wales toured the country and the Empire representing his father. During this time, Edward embarked on a series of affairs with married women, much to the horror and revulsion of his parents. The culmination of these affairs was the development of a relationship with the American divorcee Mrs Wallis Simpson, which would lead to a constitutional crisis.

George V died on the 20th of January 1936, and Edward succeeded to the throne as Edward VIII. The late King had expressed grave misgivings about Edward's reign and had predicted that it would not outlast the year. A further inauspicious moment came when, during George V's funeral procession, the Crown resting on top of the coffin fell off and rolled into the gutter. The new King was destined never to wear it.

Edward VIII made it clear to the government that he intended to marry Wallis Simpson, however the governments of Britain and the Dominions were all opposed to allowing the King to marry Mrs Simpson, as marrying anyone with a still-living former spouse was considered to be morally, if not legally bigamous. The only exception was Ireland (a country which at the time was particularly hostile to the concept of divorce, but nevertheless keener to promote a sense of indifference to a monarchy they viewed as alien and irrelevant). Suggestions of a morganatic marriage, in which any children resorting from the marriage would be excluded from the line of succession where rejected. Faced with the choice of abdicating the throne or giving up the woman he loved, Edward chose the former course of action. On December the 11th, Prince Edward (as he styled himself once again) announced his decision to abdicate via a radio broadcast. His brother Albert, Duke of York succeeded him as George VI.

Following the announcement of his abdication, Edward went into voluntary exile on the continent. On the 12th of December he received the title of Duke of Windsor. The new King compelled Edward to stay away from England from the time being, and Edward toured the continent, including Nazi Germany. This proved to be a controversial visit, in which Hitler's warm welcome of the Duke and Duchess of Windsor was enthusiastically reciprocated by the couple. During the War that followed, Hitler was said to have regretted the abdication of Edward VIII, viewing him as a teutonophile who would have been a useful ally in keeping Britain out of the war or even bringing her onto Britain's side in the war against Soviet Russia. The British authorities seemed to have taken the same view, and packed him off to the Bahamas as its governor, far away from Britain and the theatre of war. It has been suggested since by many different people that if Hitler had successfully invaded Britain he would have installed Edward VIII as a puppet monarch.

Following the war, Edward returned to Europe and lived in Paris, where he died in 1972. His wife died 14 years later in 1986. The bodies of both were returned to Britain after their death and interred in the Royal Burial grounds at Frogmore in Windsor.

Edward VIII reigned for less than a year. Consequently, the only coins issued for his reign were British West Africa pennies of 1936, which did not feature a portrait. No British coins were issued in his name, apart from some extremely rare patterns of a prospective coinage which was intended to be issued following his coronation. Edward had intended to buck the old tradition whereby a new monarch issues coins with the portrait facing the opposite way to those of his or her predecessor. Edward's vanity caused him to demand that he should face the same way as his father, on the grounds that the left side of his head was better looking than his right-hand side, but his abdication made this a moot point. When his younger brother succeeded him to the throne, he also faced the left hand side, as if his elder brother would have followed tradition by facing right had coins of him been issued. 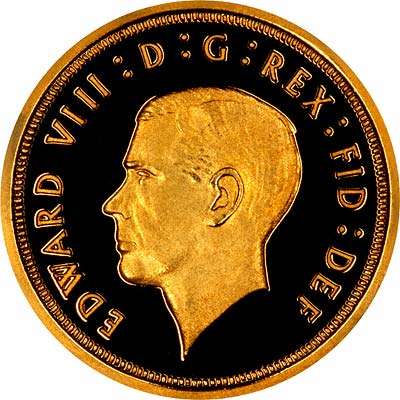