Britannia Re-emerges for Charles II in 1672

On copper halfpennies and farthings of Charles II, Britannia made her re-appearance. she is shown seated on a rock, facing left, with an olive branch in her right hand, a spear in her left hand, and a shield leaning against the rock. The shield bears a Union flag. The design and attributes of this portrayal of Britannia are almost certainly inspired by the earlier Britannias who appeared on the Roman coins described above. They were struck with a plain edge.

The Duchess of Richmond

There has also been some speculation that the likeness of Britannia on these coins was intended to be Frances Teresa Stewart (or Stuart) , later the Duchess of Richmond, but it may be that Samuel Pepys was mistaken, being either the victim of a convincing rumour or purely through wishful thinking. We are aware of no direct evidence to support this theory. Frances was a one of Charles II's mistresses at the time and also later.

There were some copper farthings issued under Charles I and James I, these were mostly a lightweight "token" coinage made under private licence or patent. There was also a very rare issue of a good quality farthing for Cromwell.

Ignoring these previously mentioned coins, those of Charles II were the first regal copper coins issued in Britain, and were made from blanks produced in Sweden, and struck at the Royal Mint in London. The British did not have the metallurgical experience of working with copper from its ingot state for a further century. These Charles II copper coins were milled coins, struck using machinery, under the guidance of Peter Blondeau, newly appointed engineer to the Mint, rather than the previous process of hand-hammering. The dies were prepared by John Roettier. From August 1672, farthings were issued from an office in Fenchurch Street, London, known as "The Farthing Office". Halfpennies were not issued until after Christmas of that year.

The delays were due to the shortage of milling machinery, and the difficulty of obtaining the necessary quantity of blanks from Sweden.

This first copper issue lasted only until 1675 for the halfpennies, and until 1679 for the farthings. Production of these low value copper coins was expensive, costing about four pence per pound weight. They were therefore struck at 40 per pound weight which allowed the Crown a profit of fourpence. After the price of copper rose, the coin's weights were reduced to 44 per pound weight, still giving the Crown a profit of three and a half pence, or 16 percent. Because it was profitable to coin copper halfpence and farthings, this encouraged forgery which created obvious problems. 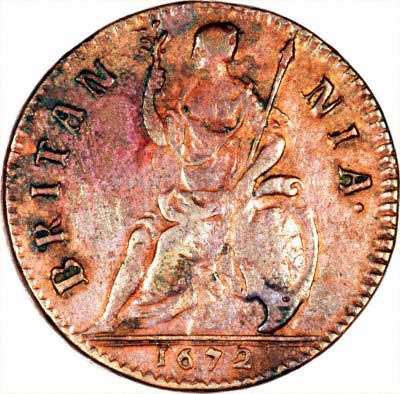 The 1672 Farthing - The First British Coin to Feature Britannia