This morning, the European Council President Donald Tusk announced the 27 countries that make up the European Union have agreed to a delay to British withdrawal day to the 31st January 2020 should the United Kingdom require it. Mr Tusk has christened this extension as a “flextension” (another word which is an insult to the English language, alongside the word "brexit"), which emphasises the point that if the British government manages to ratify the new deal through Parliament then the extension will not be necessary.

It was understood by commentators that the French government was reluctant to approve this latest delay, but the prospect of a general election seems to have convinced them to approve it. Given the current situation in Parliament, the UK is extremely unlikely to leave the EU by the 31st October. The Prime Minster, Alexander "Boris" Johnson, had previously vowed to take Britain out of the EU "do or die" by this date.

A potential winter election now beckons for the UK and Mr Johnson is manoeuvring for an election on the 13th December. Sources from 10 Downing Street are hinting they may be willing to work with the Liberal Democrats and the Scottish Nationalists to achieve this. Both the Liberal Democrats and Scottish Nationalists are seeking an election on the 9th December and a commitment that the current UK-EU Withdrawal Bill is delayed.

Sterling slipped slightly by 1.31% against the US dollar over the last week but has not really fluctuated much on these reports, currently sitting on $1.28323 at the time of writing. With a delay to the Britain's withdrawal from the EU all but certain now, it can be reasonable to say that Sterling could be in for a relatively stable period, which could see the Sterling price of gold stabilise as well. 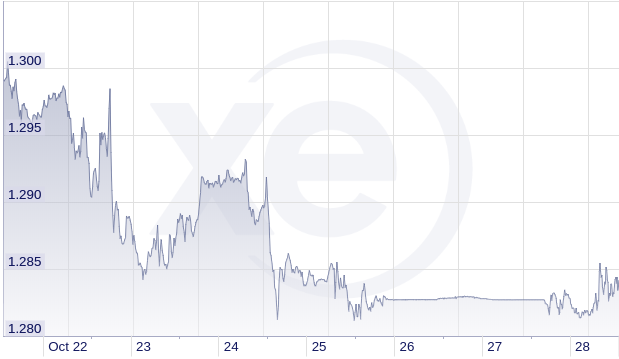