One of the more unusual methods for measuring the purchasing power of a currency in recent years is known as the Big Mac Index. In comparing the prices of a Big Mac in local currencies with the actual exchange rate between the two countries, the results give an impression of whether currencies are over and under-valued. A more recent index has been created that compares Big Macs to the gold price. 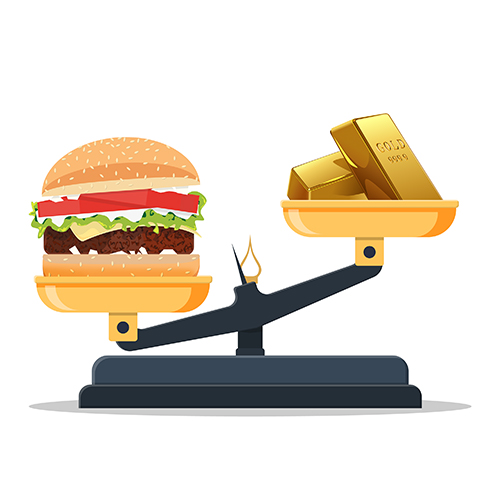 An Introduction to the Big Mac Index

The Big Mac Index (BMI) was introduced in 1986 in The Economist magazine by Pam Woodall as a way of testing the theory of exchange rates. While only intended as a light-hearted look at the theory of purchasing power parity (PPP), “Burgernomics” has become a standard tool in economic textbooks and gives an easier understanding of exchange rates.

To illustrate this in another way, the following table shows how many burgers can be bought in a number of countries with £33.90.

Clearly, your £ would go much further in South Africa than it would in Switzerland.

Limitations of the BMI

One of the problems with economics is a tendency to overthink data and then try to correct perceived disparities to make things “fairer”.  The BMI does NOT attempt to show what the exchange rate SHOULD be, nor whether people are paying too much or too little for a burger. There are a number of limitations as to what the BMI shows. Costs for factors of production (labour, land & capital) are different all over the world. In countries where local production is necessary; costs of ingredients, labour, and ingredients etc. will vary, so one country with high wages will differ to one with low wages. Also, in some countries, it is more expensive to eat in McDonald’s rather than a local restaurant. Therefore, demand for Big Macs would be much lower. McDonald’s operates on a high-volume, low margin approach to business which determines its profits in many of its markets. Others, however operate on a high margin, which would not reflect the value of a particular currency.

Global currencies have seen a lot of turmoil in 2020, so exchange rates might not be to everyone’s appetites. A more recent alternative to the BMI is the Gold Mac Index (GMI), which has been developed since 2002 and serves to illustrate the relationship between the Euro, and the Big Mac to the price of a gram of gold.
In 2017, the first study of the GMI looked from 2002 when the average cost of a Big Mac in the Euro area was €2.67, while a gram of gold was €10.98. If so, 1g of gold would buy 4.11 Big Macs (10.98 ÷ 2.67). This has since been used as the benchmark figure so is set at 1.

Yes and no. Again, the BMI and GMI are only descriptive methods, they do not make scientific claims on global economics. Instead illustrate a theory in such a manner that arouses interest. Prices fluctuate daily, and the idea that a Big Mac can be the standardised product to form a comprehensive analysis on PPP is likely to run into problems. The GMI does illustrate, what many investors believe, that gold is a better store of value than fiat currency.

You maybe interested in reading our precious metal and coin news section.