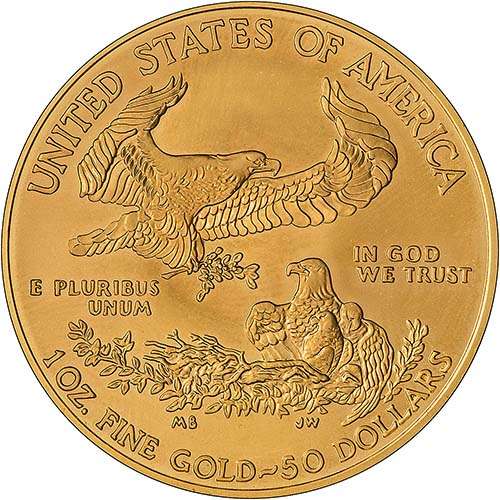 Each coin contains 0.9675 troy ounces of gold, with a gold fineness of 0.900, rather than 22ct or 24ct that you see in most modern bullion coins. The remaining 0.100 is copper. Due to the added copper, the overall weight of a double eagle is over one troy ounce.

History of the Eagle Gold Coin

The US highest denomination coins were $10 gold coins, know as Eagles. The fraction gold coins were known as half eagles ($5) and quarter Eagles ($2.50).

From 1849, the US mint set to make a higher denomination coin (due to the aftermath of the Californian Gold Rush), doubling that of the eagle with a face value of $20, hence the name double eagle. 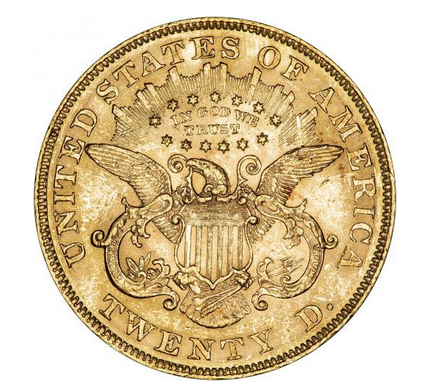 The reverse shows a representation of the Great American Seal with a halo of 13 stars and a circumscription reading “United States of America - Twenty D”. The Latin motto adopted by the Unites States “E Plouribus Unum” - meaning “One out of Many” - is just about visible on the scrolls either side of the shield.

You may notice a slight change of design on the reverse of the coin from 1866. The motto “In God We Trust” has been added. It sits in the halo of 13 stars. The shield in front of the eagle now has Rococo sides.

Other subtle changes appear from 1877. The “Twenty D” has now been replaced by “Twenty Dollars”. The scroll has thickened allowing more room for the motto “E Pluribus Unum”. 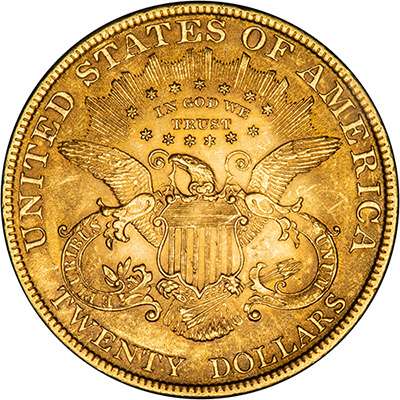 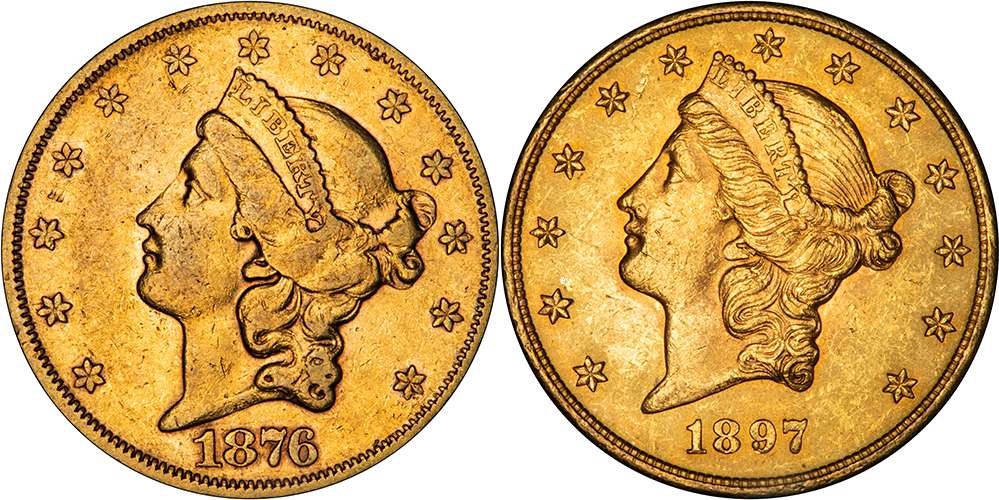 In 1861, for a brief period, double eagles were released with a slightly different reverse design by Anthony C. Paquet. Pacquet’s design shows taller letters on the circumscription. This design was withdrawn shortly after its release and so there are very few seen. The Pacquet reverse $20 are catalogued from $75,000 (S mintmark) up to $2 million for Philadelphia minted double eagles. 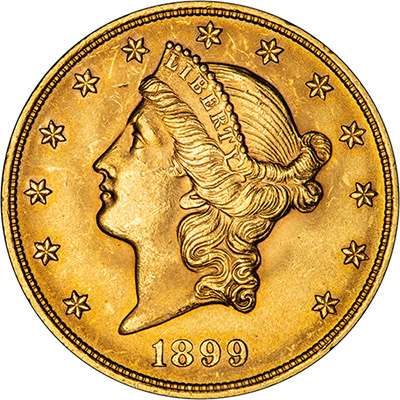 The 1849 double eagle was minted as a pattern coin. There were thought to be 2-3 minted with only one now known in existence, currently part of the Smithsonian Collection. Most would say that the 1849 $20 gold coin is the most valuable coin in the world.

Other years which are valuable due to their rarity and low mintage figures are the 1883 and 1884 proof $20 in which only 92 and 71 were minted respectively.

In 1907 there was a change of design to the infamous St. Gaudens twenty-dollar gold coin.

Augustus Saint-Gaudens was an Irish born American sculptor who was asked by Roosevelt in 1904 to design an alternative version of the $20 coin to make the coin more attractive. Saint-Gaudens worked at the mint from 1905 until his death in 1907. His design is known as one of the most beautiful designs on a US coin. The design continued to be used several years after his death.

The St. Gaudens gold $20 shows an eagle flying left through a sunset. The inscription “United Stated of America – Twenty Dollars” is set above the eagle. 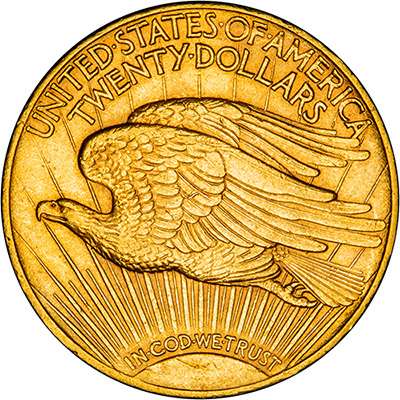 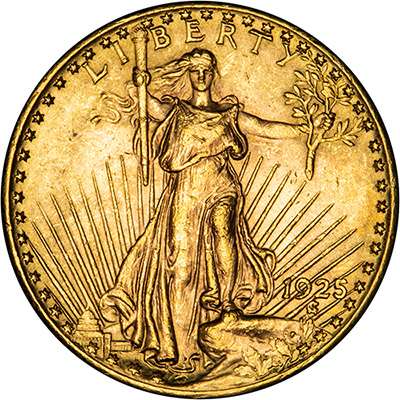 From 1908, the motto “In God We Trust” was added just above the sunrise, below the flying eagle.

The obverse shows the infamous standing Liberty design. Liberty has a floating ankle length dress which folds either side of her legs. You can see a small representation of the Capitol building in the background to the left of Liberty. In the earlier issues of the 1907 gold coin, the date is shown in Roman Numerals. This was changed to Arabic numerals later in the same year.

The edge reads “E PLURIBUS UINUM”. Each word is divided by a total of 13 stars.

The first St. Gaudens double eagle in 1907 was welcomed to a positive reception. Saint-Gaudens originally minted the first double eagles in extremely high relief. There were approximately 20 of the 1907 gold double eagle coins minted. As they were unable to be stacked due to their high relief, the mint continued to mint the same design with a lower relief (still classified as a high relief), for an approximate further 12,000 coins. The extremely high relief coins are currently catalogued at $2 million with the high relief coins catalogued at $18,000. Finally the mint released a “normal” relief version of the St.Gaudens double eagle, which collectors will be more familiar with.

“In God We Trust” Motto 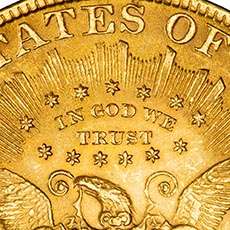 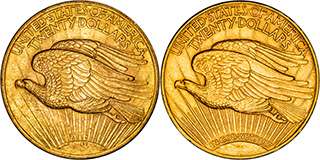 The other branch mints which produced the double eagle are 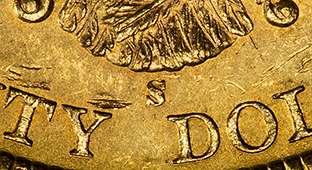 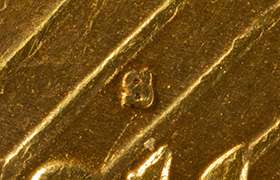 The double eagles minted at each of the branch mints will be represented in the form of a mint mark. You will find the mintmark below the eagle on the coronet/liberty head double eagles, and above the date on the St. Gaudens gold $20 coin.

How to Spot a Fake Gold Double Eagle Coin

Watch our video below on how to spot a fake gold double eagle coin. For more coin-related videos, please see our YouTube channel.

The 1933 is the double eagle which is probably the most talked about American coin. Click here to read about 1933 double eagle gold coins and their value.

We have a wide range of American Gold Eagles for sale, from Modern Bullion Eagles to Historical Double Eagles. We also have Silver Eagles available too.