It’s almost time for the 2018 sovereign designs to be unveiled! Whilst we don’t yet know what will be Britain's flagship gold coins, each year we like to speculate as to what the new design will be like.

Last year, demand was high for the 2017 sovereign and some people were disappointed when they missed out. Make sure you Register Your Interest in the 2018 Sovereign so that you don't miss out.

The 2015 Proof Sovereign – The Fourth and Fifth Portraits

In 2015, the proof sovereigns were issued with two different definitive UK coin portraits of Elizabeth II.

The early proof* and uncirculated sovereigns both featured the fourth coinage portrait of Queen Elizabeth II on the obverse. This portrait by Ian Rank-Broadley was used on sovereigns between 1998 and 2015. 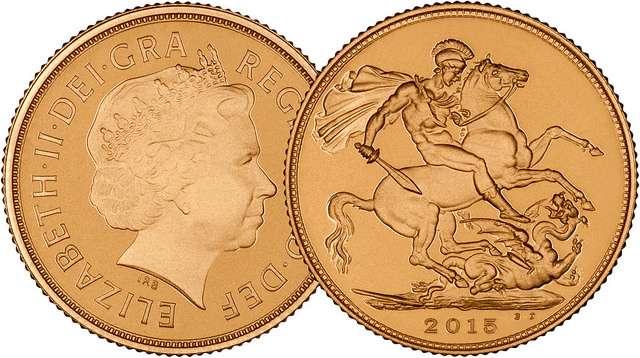 On the 6 March 2015, the fourth portrait was replaced by the fifth definitive UK coin portrait, by Jody Clark. After the new portrait was introduced, a new proof sovereign was released bearing the fifth portrait. 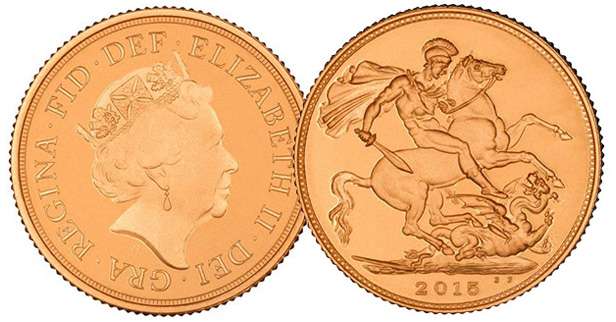 This was the first time since 1830 that two different portraits on proof sovereign were released in one year. In 1830, proof sovereigns were issued bearing both George IV and William IV.

We initially thought the 2016 proof sovereign would continue to use the new fifth portrait. However, The Royal Mint surprised us by introducing a one-off obverse design to celebrate the Queen’s 90th Birthday.  The coin featured a portrait of Queen Elizabeth II by James Butler. This was the same design that had been used on the 2015 Longest Reigning Monarch £5 crown. This special portrait again, only featured on the proof sovereign. 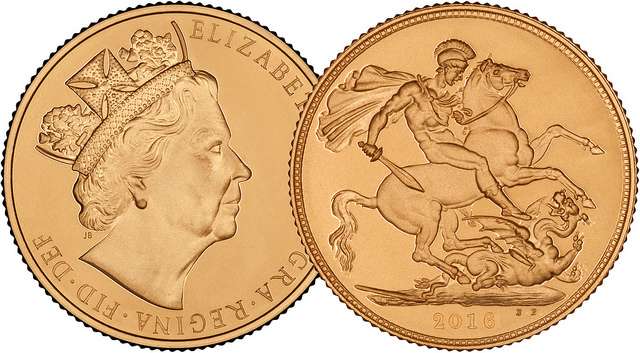 The 2017 Sovereign – The 200th Anniversary of the First Modern Sovereign

To celebrate the 200th anniversary of the first modern sovereign, the 2017 proof sovereigns featured Benedetto Pistrucci's iconic St George and Dragon and garter engraving. Original dies were remastered to replicate the 1817 design and it was the first time that the date had appeared on the obverse of a sovereign since 1887. These proof sovereigns proved to be extremely popular with demand far exceeding supply. 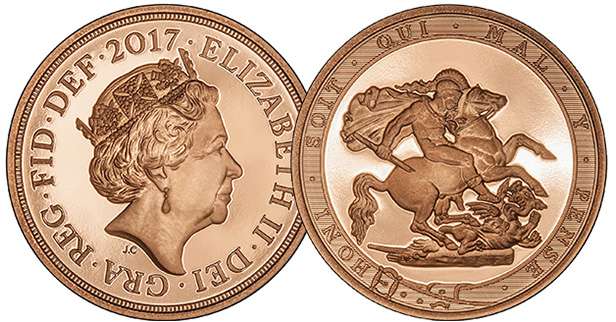 The 2017 Sovereign – The 200th Anniversary of the First Modern Sovereign

The 2017 bullion uncirculated sovereigns meanwhile featured the fifth portrait obverse and the classic St George reverse, with the addition of a small quartered shield privy mark with the number 200 above it. The shield is placed to the left of the date on the reverse of the sovereign. 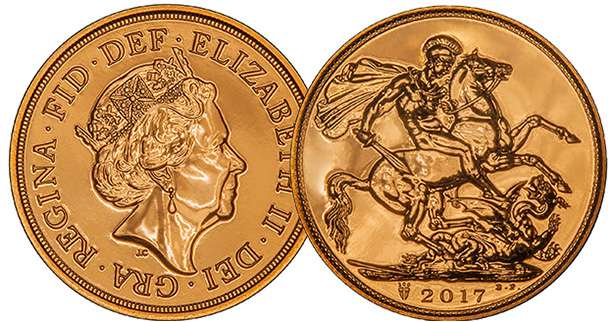 In addition to the proof and uncirculated sovereigns, three more coins were issued to celebrate the 200 Anniversary. The Five Sovereign Piece, a five pound coin struck to a brilliant uncirculated finish. Unlike other BU £5 sovereigns, the reverse design was struck three times instead of the usual two times. The dies were hand polished and a very similar finish to the proof sovereign was achieved on the reverse. This process was also used on the Strike on the Day BU sovereign which was struck on 6 July, the actual 200th Anniversary of the proclamation of the sovereign. Lastly, for the first time since 1504/1505 a piedfort proof sovereign was issued. Only 3,500 piedfort proof sovereigns were issued making them one of the most interesting coins in the collection.

The 2018 Sovereign Collection - Our Prediction

2018 will be a big year for the Royal family, with Prince Charles's 70th birthday, the arrival of a new baby and a possible engagement. The only thing we can think of which could warrant a change to the sovereign design would be the 65th anniversary of The Queen's Coronation.  What do you think? Will the design be different, or will it revert back to the fifth coinage portrait and St George reverse?

What Is The Difference Between A Proof and An Uncirculated Sovereign?

The difference is the finish. Proof sovereigns are produced using special hand-polished dies which are closely monitored throughout minting. The proof coins are struck up to four times to achieve a high definition coin which has a mirrored finish on the background and a frosted effect on the lettering and design. The process is longer than production of the uncirculated coins which are only struck once. Proof sovereigns are issued to a fairly low mintage and are subsequently more expensive.

Sign up to our mailing list and we'll make sure you're the first to hear about the new coins and special offers on the new collection.