Introducing the latest Beatrix Potter fifty pence coins in the series. The tale continues in 2018 with four new coin designs. To buy Beatrix Potter 50p coins click on this link.

The Royal Mint has announced a third series of Beatrix Potter Fifty Pence coins which will be released in 2018. There will be four coins in the series, each featuring an iconic Beatrix Potter’s character; Peter Rabbit, Flopsy Bunny, The Tailor of Gloucester and Mrs Tittlemouse.

The Beatrix Potter coin series began in 2016. The first coloured coin featured Peter Rabbit, and caused quite a stir, with prices soaring from £50 to over £500 within weeks. The base metal version is our most enquired about coin, with avid coin collectors questioning their value.

in 2018, Peter Rabbit appears on his third 50p coin (although he does make a special appearance on the 150th Anniversary of the Birth of Beatrix Potter coin. The 2018 Peter Rabbit 50p features the naughty rabbit wearing his famous blue coat munching on a bunch of juicy carrots. This coin is sure to be the most popular of the series.

This coin was released on 19th February 2018. In addition to the brilliant uncirculated and silver proof coin, this fifty pence will also be struck in a gold proof finish. 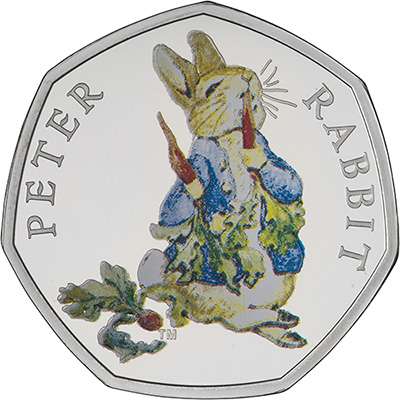 Flopsy is the sister of Peter Rabbit and first appeared in the book, The Tale of Peter Rabbit. She later married another well-known Beatrix Potter character, Benjamin Bunny, and their children are featured in The Tale of the Flopsy Bunnies.

Flopsy Bunny keepsakes are often a favourite gift for baby girls, which is why we’re excited that The Royal Mint has chosen to release this coin. We think it will be extremely popular for baby births, birthdays or Christenings.

The 2018 Flopsy Bunny 50p features this pretty little rabbit wearing a cape. This coin is available in both the brilliant uncirculated and coloured silver proof finishes. 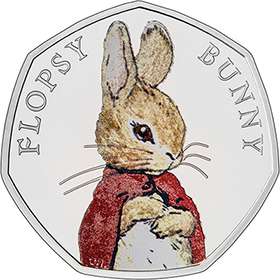 The Tailor of Gloucester

It is often said that out of all of Beatrix Potter's books, The Tailor of Gloucester was her favourite. The story revolves around a tailor, who receives a helping hand from some mice he’s freed from his cat’s capture. The Tailor is sat upon a cotton reel and whilst reading a newspaper.

This coin was released on 9 April 2018 in both the brilliant uncirculated and coloured silver proof finishes. 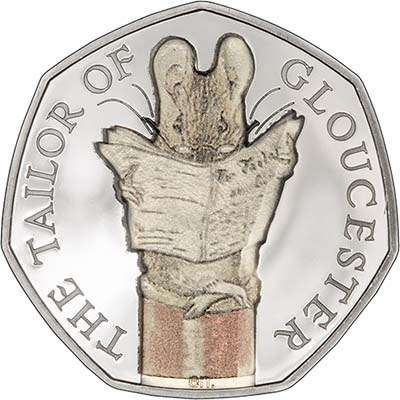 Mrs Tittlemouse is the last of the 2018 series. This clean-freak mouse is sure to be popular with collectors. Mrs Tittlemouse first appeared in The Tale of The Flopsy Bunnies, where she helped to rescue Benjamin and Flopsy Bunny’s children.

The Mrs Tittlemouse coin will be released in May 2018 in both the brilliant uncirculated and coloured silver proof finishes. 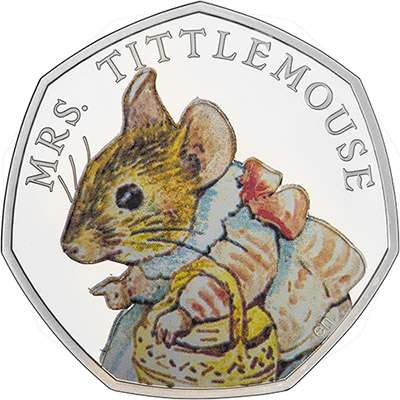 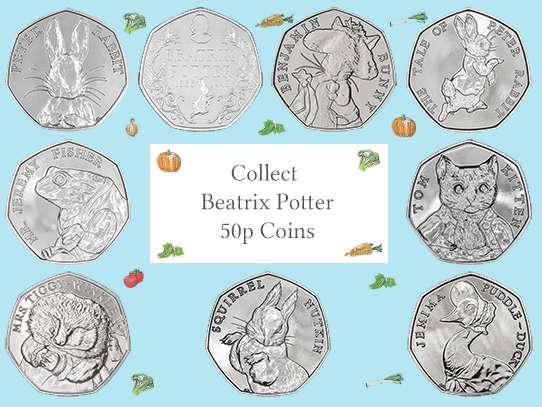 A number of the Beatrix Potter fifty pence coins have been released into circulation. Whilst it is interesting to find them in your change, you may find that they may only be worth their face value of fifty pence. There may be private collectors who might pay more but the price achievable depends on the condition and rarity of the coin. In 2016, 9.6 million Peter Rabbit fifty pence coins were issued for circulation.

Please note these figures are for the the individual coins in presentation boxes, some coins were also issued as part of sets.

When compared to the 2009 Kew Gardens fifty pence where only 210,000 were issued, you can see from the mintage figures above that the 2016 Peter Rabbit fifty pence is not considered a rare coin.