The new twelve sided £1 coin has been touted as the World's Most Secure Coin. With a number of security features introduced to protect Britain's coinage from forgers, the one which has caught the public's imagination is the hidden magnetic security feature embedded between layers of sophisticated electro-plating.

Well, it wasn't easy, but we've cracked the secret code of the world's most secure coin, the new 12 sided £1 coin.

The Royal Mint didn't reckon on our Northern grit and determination to unlock the code.

We were able to harness the ultra violet light from our Baby Chard's incubator. Combined with the magnetic synthesiser frequency from Abba's 'Money, Money, Money' track we managed to create a high-speed automated detection unit. The signature that was revealed was totally unexpected and to be honest, mind-blowing.

As you can see in the image below (click on the photo and zoom in), below Jody Clark's fifth portrait of Queen Elizabeth II there is a signature which can only be detected when the vibrations align. We were able to capture the code which was stated to make the new 12 sided one pound coin, The World's Most Secure Coin. The pigment which is only visible using the combination of ultra-violet light/magnetic synthesiser frequency/vibrations clearly states www.chards.co.uk. Although, we are sorry that the code was so easily hacked, we are also proud of the association with Britain's favourite circulation coin and thank The Royal Mint for their hidden accolade. 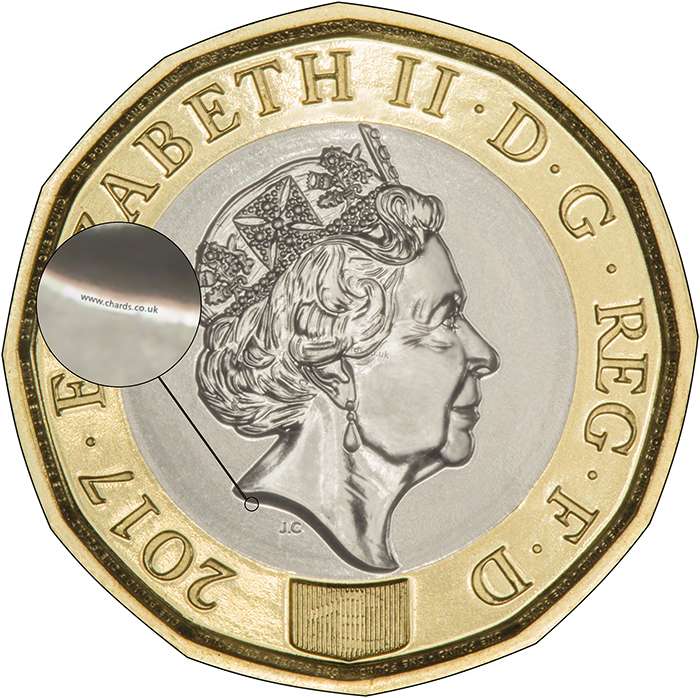