2017 200 Anniversary Strike on the Day Sovereign

You have reached our blog. If you wish to buy a Strike on the Day sovereign click here.

On the 1 July 2017, a 200th Anniversary of the Sovereign Strike on the Day sovereign was issued to mark the royal proclamation which introduced the modern sovereign in 1817. 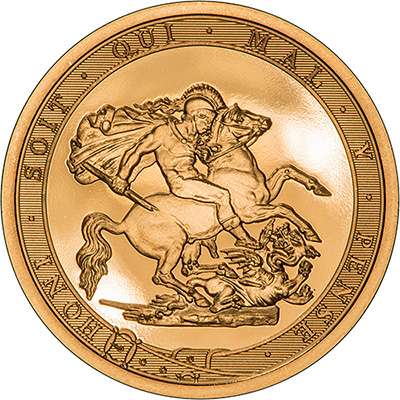 The coin bears Benedetto Pistrucci's original garter design which first appeared on sovereigns in 1817. The reverse engraving on the 2017 sovereign was achieved using remastered dies of the original dies used for the 1817 George III sovereign. Struck in 22 carat gold, the British sovereign is British legal tender and is exempt from Capital Gains Tax. Unlike the proof and the uncirculated sovereigns issued in 2017, the BU sovereign has been produced with a plain edge. The coin is limited to a mintage of 1,817.

Many sovereigns were issued with a certificate which stated inside that the finish was a proof finish instead of a brilliant uncirculated finish. 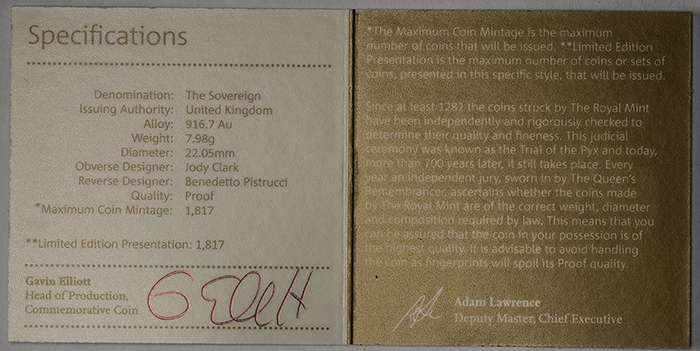 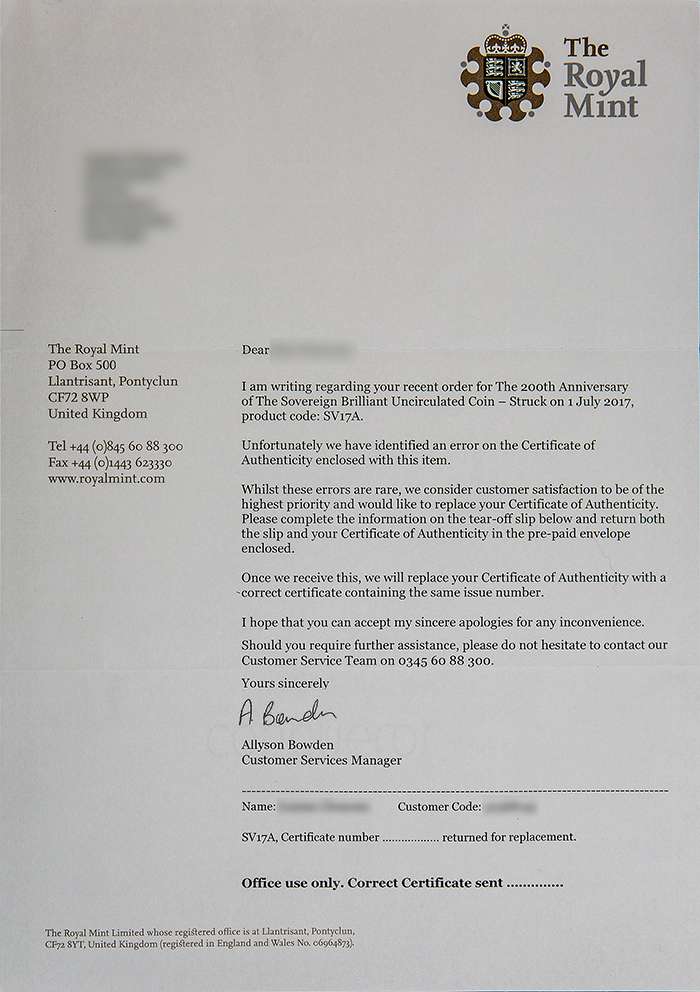 We would suggest that if you have one of the error certificates, it would be better to hold onto it as in time it may be worth more to collectors.

According to The Royal Mint, production of these sovereigns commenced at 12 am on the 1 July 2017 to ensure that the limited mintage of 1,817 sovereigns would be complete by 11.59 on the same day. In an email from Royal Mint Customer Services department they wrote (sic):

When we compared the two coins side by side it was clear to see the difference between the finish of the Proof sovereign and the Brilliant Uncirculated sovereign, even without a loupe or a magnifying glass. The field* in the proof sovereign is a highly polished mirror finish, whilst the field of the brilliant uncirculated sovereign is a polished 'proof-like' surface but is not as smooth as it is on the proof coin. The definition in the actual design is very similar although there is fractionally a deeper relief in the engraving on the proof sovereign. The proof-like finish has caused some confusion as expectations have been raised but the quality is simply not to the same standard of a proof coin.

We have seen a number of small production marks, some not visible to the naked eye, but noticeable under a magnifying glass or loupe. We have also seen, disappointingly, a fairly large proportion of coins where there are more definite marks (hairline scratches, dents and spots where the frosted finish is damaged).

We asked if would be able to get replacement coins, unfortunately this is not possible.

Here are some examples of the production marks: 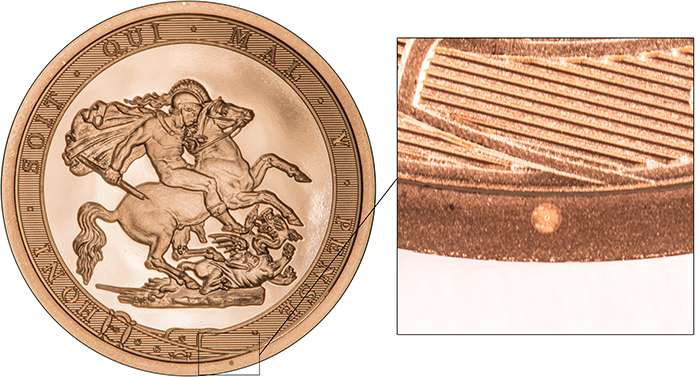 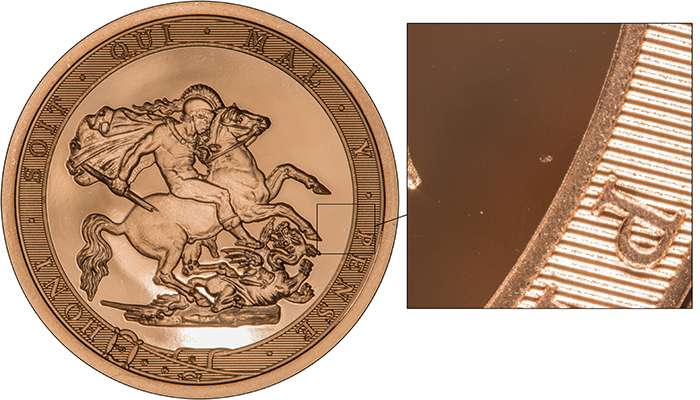 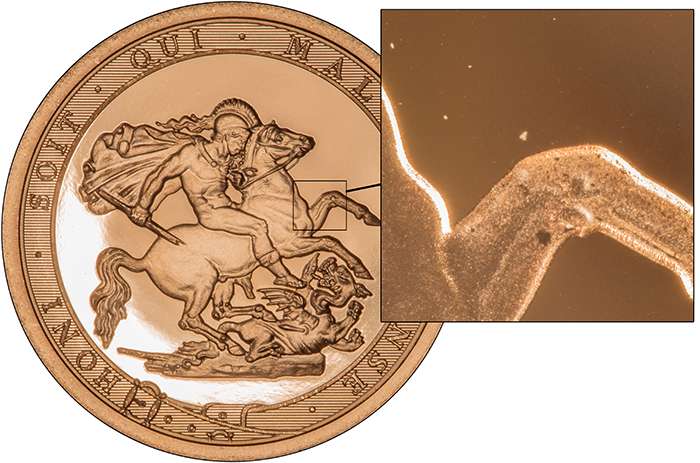 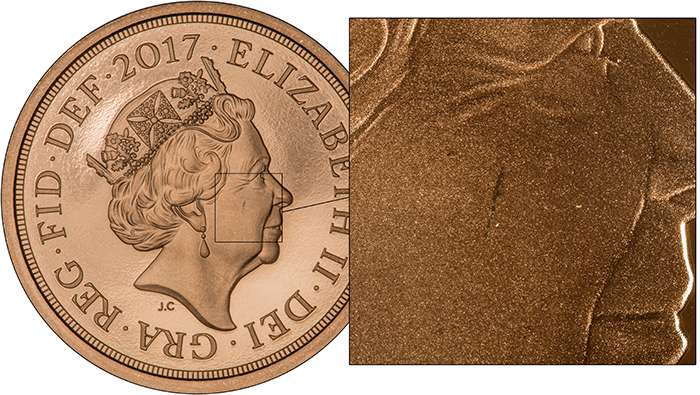 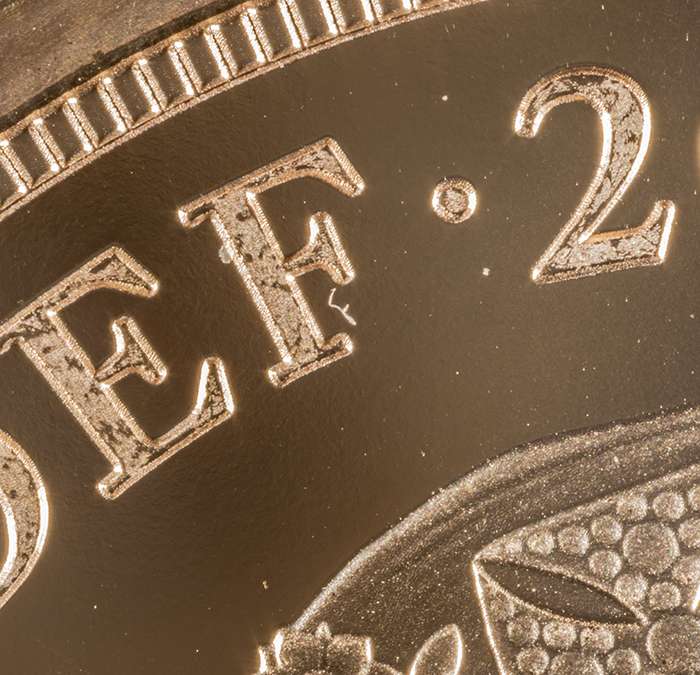 What is the Difference Between a Proof and a Brilliant Uncirculated Finish?

Different mints have different production standards, it would appear that The Royal Mint may need to re-evaluate their quality control.

A number of coins have been issued to commemorate the 200th Anniversary of the Modern Sovereign including proof coins in five sizes, a brilliant uncirculated £5, a piedfort proof sovereign and an uncirculated bullion coin.

If you are interested in the British sovereign. Read our blog The Sovereign –Britain's Favourite Gold Coin.

* The background or surface of the coin is sometimes referred to as the field or the table by numismatists.

** Bullion is not a grade, it is a term used to describe precious metals that are bought and sold at or close to the intrinsic metal value.